Fury retained the WBC heavyweight title at Tottenham Hotspur Stadium on Saturday night and will now take on Usyk next year.

The Ukrainian holds the remaining three titles and their fight, likely to be held in Saudi Arabia, presents the ‘Gypsy King’ with the chance to become the first British undisputed heavyweight champion since Lennox Lewis.

“We’re going to see the biggest year of hopefully my career in 2023 and we’re going to get those big fights,” declared Fury. Chisora offered little resistance against the incumbent, who dominated for 10 rounds until the contest was stopped with Usyk watching ringside.

Fury’s showdown with Usyk is likely to put an end to talk of a mega-money fight with Joshua. The pair have nearly fought on several occasions, with Joshua and Fury agreeing terms to fight this winter only for the bout to break down. Fury blamed the former Olympian for the collapse of the fight and now the richest fight in British boxing history – worth an estimated £200 million – will be shelved for good.

“Zero, not happening,” said Fury of Joshua. “I want to fight a real man and challengers who want to fight. Usyk came here tonight to make a fight, he was ringside and he stood there right in my face. We live in the same country and has anyone ever seen AJ [Joshua] do that to me? Get in my face at a fight and say ‘let’s get it on like Donkey Kong?’. No.”

Fury then turned his thoughts to Usyk, the Ukrainian who has beaten Joshua twice and holds the WBA, IBF, and WBO heavyweight crowns.

The Fury-Usyk blockbuster is expected to take place in the first quarter of next year in the Middle East.

“Let’s talk about Usyk because now I can,” said Fury. “I’m ready and willing to take on Usyk next whether it’s in Saudi Arabia or here in the UK. Both places would be fantastic, so let’s give the fans one champion, one name, one face.” 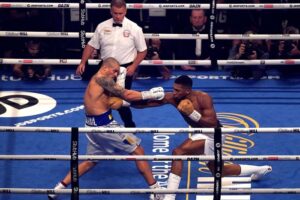 “Usyk’s up for the challenge, he came over tonight so fair play to him. He’s not an easy boxer to figure out, he’s a slick southpaw mover with very good skills, an Olympic gold medallist and he’s shown some good form. I’m really looking forward to the challenge.”

Fury’s promoters Frank Warren and Bob Arum both disclosed to Telegraph Sport that they expect the Usyk contest to be confirmed “in a couple of weeks”.

Fury explained: “I hear all this talk of big money in Saudi Arabia, I even spoke to Prince Khalid before and I said ‘are you going to put this fight on?’ And he said ‘why am I here?’.If he’s as good as his word, it looks like we’ll be putting it on.

“Sometimes the big fights don’t happen for whatever reason,” added Fury. “I have a good feeling this one will happen, but if it doesn’t, then we’ll have Joe Joyce at  Wembley. If Usyk does happen, I’ll do it and then have Joe Joyce at Wembley [afterwards].” Joyce, from London, unbeaten in fifteen fights, with 14 knockouts, is the WBO’s mandatory challenger.

Fury added: “People have been asking me all night, who’s your tougher fight, Usyk or Joyce? In my opinion, Usyk is a slicker boxer, but Joe Joyce gives me a tougher fight, in my view. I’m not going to take anything away from Usyk, he’s the undisputed cruiserweight champion, and he’s the unified heavyweight champion, so he’s had a fantastic career. But I do think the biggest challenge out there for me is Joe Joyce. I’m very impressed with where he’s come from and where he’s at. He should be an Olympic gold medallist, he got ripped off in my opinion [at the Rio 2016 Olympic final against Tony Yoka, of France].

He’s done everything asked of him. He’s mandatory already so if Usyk can’t be made, it will be the juggernaut and it will be a clash of titans for sure.”

Asked why he is being described as “unbeatable”, Fury responded: “Listen, we’re all blood and bone. I train hard and I dedicate myself to this game. It’s not about what’s on the outside, it’s the size of the fighter inside you. I retired back in April and I really meant it, hand on heart. Frank [Warren] tried to come to me with exhibition fights and I said ‘I don’t want to box anymore’.

“I had four months of that at home with Paris and the kids and the dog, a normal family life. I always said I wanted to live a normal life in Morecambe Bay. But when I thought about it, I’m anything but normal, I’m abnormal. This is what I do, this is what I am. This is what has defined me as person. If it wasn’t, I wouldn’t be winning these fights.”