There were 60,000 fans watching Tyson Fury on Saturday but nobody was more excited than Wayne Rooney.

“Tyson’s the best we’ve seen for a long time,” Rooney told me in the immediate aftermath of the fight. “I don’t think anyone will beat him. “I probably think he should be knighted, if I’m being honest.”

Given his anti-establishment stance over the BBC Sports Personality of the Year award, a knighthood might seem unlikely – but then this is Tyson Fury, 2022. Once, Fury was the man of the people – now, he is the man of the great and the good too.

How else to explain the presence of Gordon Ramsay in his dressing room? Ramsay and Rooney were both visitors into the inner sanctum before the fight and the celebrity chef told me: “He’s a special character, and I think the public have just warmed to him as his career has played out.”

Promoter Frank Warren told me last week that he believes Fury, who beat Derek Chisora on Saturday, could now be deemed the UK’’s biggest sports star since David Beckham while Bob Arum told Telegraph Sport post-fight that Fury is the “biggest personality boxing has had since Muhammad Ali”. Arum, of course, promoted Ali in the 1960s and ’70s, so knows what he is on about.

The very best fighters – particularly the heavyweights – have historically drawn some of the biggest public figures from the worlds of glamour and glitz to ringside. It underlines Fury’s status as the biggest name in the sport right now.

At ‘The Fight of the Century’ between Ali and Joe Frazier at Madison Square Garden, New York, in 1971, the Hollywood star Burt Lancaster was on commentary duties and Frank Sinatra was working on the ring apron as a photographer for Life Magazine. 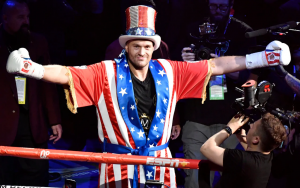 As Warren commented in the after-glow of Fury’s brutal dominance of Chisora, mercifully freed from his own bravery by the referee Victor Loughlin in the 10th round, his charge has reached a status beyond simply being a boxer.

Fury had ballooned to 28 stone in weight five years ago, in a period in the wilderness after first claiming the world title in 2015. Losing 10st in weight, being public about thoughts of suicide and mental health issues, and being from a family of the traveller race, have shone a light on the narrative of his life and transformation.

“It is a movie script because he has Netflix following him around the place, making a series about him. He’s just a one-off, he is without a doubt the most-entertaining person in boxing since Muhammad Ali,” said Warren.

Arum is in agreement. “Boxing is a form of showbusiness, it’s entertainment. It’s entertaining the fans and there is no fighter on the planet today who is as much a showman as Tyson Fury and that’s why 60,000 people will come out in the dead of winter to watch him fight.”

I had the privilege of being invited into the dressing room myself while Fury’s hands were being wrapped by trainer Sugar Hill Steward, and up close in those moments, Fury displays an ability to relax with huge clamour around him, before switching into his fight mode alter-ego.

There are many television cameras in there, a hubbub around him, while a phalanx of family members are also there – his father John, his brothers, their wives, and on this occasion for the first time, even two of his children, Venezuela, aged 13, and 11-year-old Prince. His son carried the WBC heavyweight belt from the dressing room to the ring. It is remarkable given the nature of the sport, which, at the end of the day, is a fist fight.

Fury’s wife Paris told me that “the nerves never go away” as she witnesses her husband, the boxer, laughing, joking, and enjoying the music being played as the ‘Gypsy King’ watched the fights on a large television screen preceding his walk-in. Born to fight. And now a champion who has transcended the sport.