Conor Benn is no stranger to shutting out external noise and insists he will do it again to stay on course for a world title shot by winning his “legacy fight” with Chris Eubank Jr.

The sons of two of British boxing’s biggest stars from the 1990s will clash at the O2 Arena on October 8, almost 29 years to the day since their fathers fought for a second time.

Nigel Benn and Chris Eubank produced two thrilling world title bouts, the first in 1990 which went the way of the latter before a draw occurred three years later but the trilogy was never forthcoming until the children of the pair took it upon themselves to write the third instalment of the rivalry.

“There has always been a lot of outside noise but you put the blinkers on and stay focused on what you have got to do. I will do that no problem,” Benn, 25, told the PA news agency.

“I mean this is definitely a legacy fight, a fantasy fight and one for the supporters but world title is the main goal.” 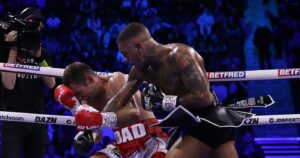 DAZN will show Benn versus Eubank Jr live on pay-per-view with the bout coming under a catchweight category, understood to be at 157lbs, due to the varying weights of the two boxers.

Welterweight Benn fought at 146.5lbs for his April demolition of Chris van Heerden while Eubank Jr, who has boxed at super-middleweight in the past, came in at 160lbs in February when he beat Liam Williams on points in a one-sided contest.

Middleweight Eubank Jr will carry the height and weight advantage but Benn has no qualms about stepping into the ring against an opponent who is also seven years older at 32 and turned professional five years earlier in 2011.

He added: “Any fight at this level is a gamble. When you are talking (Keith) Thurman, (Yordenis) Ugas, Jose Ramirez, you are talking about a gamble so that goes neither here or there.

“When you step up to fight anyone top-five globally, there is always a risk element.

“The weight for me is not an issue. We were just miles apart from when I started (in 2016) and where he was at, but that gap has closed massively. We’re both top-five fighters globally and the best fighters in our divisions in the country so why not make the fight?”

Benn first watched the historic clashes between his dad and Euban

k at the beginning of his teenage years.

‘Born Rivals’ is the official title of the all-British contest but while Benn (21-0, 14 KOs) insists a meeting with Eubank Jr (32-2, 23 KOs) was inevitable, it was never one he initially craved.

“He is happy the fight is happening and it’s done and sealed,” Benn said of his father Nigel, who was a world champion at two different weights across a nine-year professional career.

“Since I turned pro our names were always linked because of the old men’s rivalry.

“I never sat down and thought, ‘I really want that fight’ but I thought the fight was inevitable, it was always going to happen.

“They were just great fights, it was a great rivalry and they were entertainers. That is what they did for the British public, they captured the imagination of the public and they delivered.”

The bout between Eubank and Benn is a catchweight clash, meaning that both men will agree to the weight limit, which is expected to be at 156lbs – a touch lighter than middleweight.

The fight will take place on Saturday October 8.

The O2 in London, the venue formally known as the Millennium Dome.

How to watch Eubank Jr vs Benn on TV

Television details for the fight have not been announced.

How can I buy tickets?

Tickets go on sale on 13 August from midday, and you can buy them either by visiting the O2 venue website or by going directly to the AXS site.

Eubank Jnr, the son of Chris Eubank Snr, has won all but two of his 34 fights — 23 of them by knockout — and heads into the O2 bout after an impressive points victory over Liam Williams, in which he knocked the Welshman down four times.

Eubank, 32, has previously boxed at super-middleweight, but has moved to middleweight and will have to drop a further four pounds as the contest with Benn is expected to be at 156 lbs.

“I grew up watching our parents’ legendary battles and always wanting to emulate that, and find my own arch nemesis… could this now be Conor Benn? We will find out. He has walked the same path as I have. I know his struggle. Living in the shadow of a legend and trying to break out of that shadow and make his own name.

“If he can beat me, his name will be made, and he will never walk in his father’s shadow again. It’s a fight that’s going to spark the imagination of the British public, that’s what I’m happy about. In terms of anticipation, legacy and hype it’s the biggest fight of my career.”

Tell me more about Conor Benn

Benn, the 25-year-old son of Nigel Benn, has won all 21 of his fights, 14 via knockout. He has fought at welterweight and his run of impressive victories has earned high world rankings in the 147lbs division. Benn now steps up in as an underdog to challenge the son of his father’s greatest rival.

Benn said: “This fight is for the legacy and was an opportunity I felt I couldn’t pass up. My team and I had other options
on the table as I’m currently ranked top 5 with all governing bodies at welterweight and no doubt I’m looking for a World Championship fight very soon, but this fight is embedded with so much history and I know it’s one the public really want to see.

“To me this fight is personal – it’s more than titles and rankings, this is unfinished business between our families.

“Born rivals is the perfect calling for this fight, because we have always been associated and I’ve always been asked if we’d ever fight, and now I can’t wait for the world to be able to watch us make that happen.

“All I know is that from my side, this will be an all-out war, last-man-standing kind of fight. Neither will give up until the last bell rings. I won’t be looking to take this to the score cards though, this will be explosive from the off. I’m so up for this.”