Anthony Joshua revealed on Wednesday that he sacked his training team, including long-time trainer Rob McCracken, because no one told him he “was losing” his heavyweight title fight against Oleksandr Usyk.

The two-time heavyweight champion felt forced to change his corner following his defeat last September in London, and as a result Joshua has formed a new partnership with Mexican-American trainer Robert Garcia for their August rematch.

“There was no ‘you need to take it to him now’, and I thought I was winning the fight,” Joshua said. “A trainer needs to tap into that psychological aspect and tell his fighter that he is losing.”

McCracken had overseen Joshua’s rise to Olympic gold medallist a decade ago, and, moreover, his ascent to glory as heavyweight champion but Joshua is now “hellbent on reclaiming the belts” in his sequel against the Ukrainian Usyk for the IBF, WBA, WBO and IBO world titles in the Saudi Arabian city of Jeddah on Aug 20. 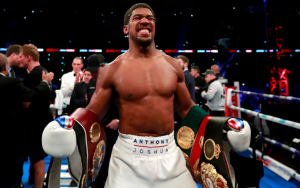 Joshua, alongside Usyk on Wednesday in London to promote the contest, disclosed: “There was a lot going on in the corner [last September] and that didn’t help. A corner is like a pitstop. You’ve got probably 55 seconds in total to calm down, hydrate, get simple instructions. That’s the way you should do it. So too many voices at once is definitely not good for anybody, not just me.”

But Joshua had not been told to put his foot on the gas as the fight ebbed away from him and Usyk’s skills came to the fore. “It was more like ‘double jab, right, left hook’, it wasn’t like ‘take the fight to this f—–, listen you’re losing the fight’, no. A trainer needs to tap into that psychological aspect now because if you can overcome your mind you can give more. Not always but at times like that, yeah, ‘we’re losing a world championship fight’ and sometimes you need to tell your fighter that.”

Joshua added: “I’m not blaming anyone by saying that but I didn’t get any impression that I was losing. That’s why when they announced the name I was kind of like ‘huh?’ It was all just ‘that’s it, keep on going’. So I was jabbing and jabbing. It was hard to accept afterwards. Now when I watch it back I think he won by three rounds, that’s probably from the ninth onwards.” 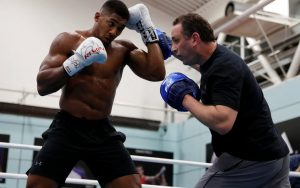 Joshua disclosed that he needed to take ownership of his career and the split with McCracken had been necessary. “In terms of Rob not being in the camp, it’s cool. Boxing is boxing. A different environment was needed at that time so it’s cool, no problem. I knew what I wanted to do. I wasn’t forced, it was my own decision.”

Joshua, who added that in retrospect a move to American styles and coaches should have come sooner, spoke of his change of style under Garcia, and Angel Fernandez, with whom the Briton has worked for almost three years.

“One of my strengths was my power but I always wanted to go down that path of being a clean boxer, ‘hit and not get hit, especially if I want to have a long and successful career,” he said. “You need to have good defence but I moved away from the ferocious side of boxing where I knew I could hit and stun people. And I do miss the days of slicing people’s faces open and hurting them, for sure. So I am looking forward to getting back to that.”

Looking back on the last year, Joshua reflected: “I wanted to grow, I didn’t want to leave. I had three options: change what I had completely, what I’ve done now. Rob is no more, bring in new people. Keep what we have, don’t make any changes, or add to what we had. I’ve now completely changed it, and it is the last straw to the jigsaw. That’s where we are now.

“But this time, whoever is talking, won’t be like the last time against Usyk. There will be two voices in the corner. And I’ll leave them to sort that out.”

Joshua, who returns to camp in Loughborough on Thursday, also addressed the ‘talking to’ that he gave a group of students at the University who were shouting insults from a window of their residence.

“One night I couldn’t sleep at 3am so I went for a walk. And the reason I had to address them is that their block and my block are next to each other and they cannot get comfortable calling me names from a window. I told them ‘I am here to work, I am not playing games with anyone and they were crossing the wrong person’. There were four or five of them and that’s the only reason I dealt with them in that fashion.

“I told them that, if they see me on my own again and they want to shout that s— at me, ‘I will break your jaw’. We left it at that and I spoke to them afterwards and we shook hands.”

Usyk, meanwhile, also an Olympic gold medallist from the London Games and undefeated as a cruiserweight and heavyweight world champion, said that he is fighting for his country, Ukraine, and that he is inspired by the people defending his homeland.

Usyk explained: “I don’t think about what Anthony Joshua does with Robert Garcia, it is not my business. I don’t care how Anthony trains or what he does, I just worry about my training camp, what I eat, my work, how my family are, my country. I don’t think about Anthony.

“If people are telling Joshua that the only way he wins is to pressure me and look for the knockout, then let them keep speaking and let him hear them all.”