Despite the clamour for him to return to the ring, Fury is adamant he is retired… although he could be tempted by a £500m offer

It has been the burning issue in boxing since Tyson Fury knocked out Dillian Whyte in April then immediately hung up his gloves: is he really retired?

The good news for those wanting to see Fury, modern boxing’s most compelling fighter, return to the ring is that he names his price to Telegraph Sport. The bad news? “£500 million,” he says. “So if somebody wants to pay that, I’m sure there’s people out there with a lot more than that, then I’ll return. But until that day, kaput, I’m out. And if someone wants to waste half a billion, I suppose my morality will be tested.”

Fury, then, is adamant even now, two months on from that night in front of 90,000 spectators at Wembley, when his stance may have started to soften. Unlike many boxing retirements, he says, there will be no return.

And for good reason too. “Two people in history retired as undefeated heavyweight champions of the world, me and Rocky Marciano. It’s an exclusive club,” he adds. “If I do come back it’ll be a sad day for me and it will be that I’ve let money overcome my morality because I put achievements before money. But if someone wants to put half a billion on the table I will test that morality for sure.”

Fury has been busy. Plans are in place for a speaking tour around the UK, followed by a global sojourn on stage, a third book delving into his mindset. There is even a record deal in the offing.

It is a whole new world for the man from Morecambe who, just five years ago, was 27st, depressed and contemplating taking his own life. Now he is mates with Ed Sheeran.

“I wanted to retire after the trilogy fight with Deontay Wilder [last October] but I owed one more fight to the fans in England and I did that and a promise is a promise,” explains Fury. “The warrior in me has brought me to every moment in my life, off the canvas, trilogies, conquering America, coming back, doing everything I’ve done, winning every belt there is in boxing, three times The Ring Magazine [title holder]. I won everything, so a warrior can do what a warrior wants to do.

“But the actual man is done with fighting,” he explains. “Boxing – and professional fighting – I am so over it. I’ve got out of it, faculties in order, totally unscathed, successful, famous… I’ve done everything that was asked of me, defeated every opponent I’ve ever faced and to be able to have a life after that – isn’t that amazing and a beautiful thing?” 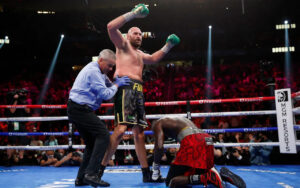 Looking back on the night at Wembley Stadium, Fury adds: “Yeah, it was an absolutely amazing, fantastic, unbelievable night, what a way to end a sensational career. Wembley, the highest crowd ever recorded for any [boxing] event [there]. It was unbelievable to go out with a bang like that, the ring walk was epic, everything about it was fantastic – the boxing lesson, the knockout, just everything fell into place and the stars aligned again.

“I’ve had a couple of months to reflect on it, I just think what a wonderful career I’ve had, the ups and downs, the highs and lows, the comebacks, the retirements, the coming back from all the problems, it’s all life experience, and after boxing I’ve got plenty of life yet at 33.”

Many believe, though, that Fury could be tempted back one more time if his British rival Anthony Joshua defeats his nemesis, the Ukrainian Oleksandr Usyk, and claims back the three heavyweight belts he lost in London last September, in Saudi Arabia in August, with the official announcement imminent.

But Fury – although he admits that one punch can change everything in heavyweight boxing – believes Joshua will not win. “I just think Usyk’s too good of a boxer for AJ and I don’t think AJ’s got the ability to pressurise him for 12 rounds and drag him into a dog fight and knock him out,” he says.

“He’s too easily happy to come second position, and if you’re willingly settling for second, say no more.”

‘I’m the only living member of an elite club’

Nor will telling his story to the public, and adoring fans in his upcoming tour. The man – and the fighter – gets something special from it. “I was with Ed Sheeran the other night and he was telling me he did 700 and something tour dates, which is amazing, and he gets to go around the world and meet millions of different people in all these different countries.

“They’ve all got the same common goal, they all love music, but with me people can like music, they can like boxing, they might have struggles their own self, so it’s very good for me to give back a little bit to people and it gets me on the road and keeps me busy and gives me a goal and something to focus on.”

Life has gone full circle for Fury, once overweight and stuck in his head with nowhere to go. “It seems a far cry from where I am today, nobody believed, like they say, but God did. Nobody believed I was going to beat Wladimir Klitschko when I told everyone. Then they certainly didn’t believe I was going to lose 10 stone and regain the world heavyweight championship or that I would stand and bang with Deontay Wilder,” Fury laughs.

“I’ve travelled a long way. It’s night and day differences from now and then.”

If Fury never comes back to prizefighting, he reckons his place in history is secure. “I’m contented, very, very happy with my career and sitting on top of the pile of the elite members-only club [with Marciano] and no-one can ever take that from me, ever. People might try and emulate it, there might be a couple of members in another hundred years, but I would openly welcome these guys into my club. I’m the only living member of my club.”

Yet there is still the sense that, in time, the Gypsy King will be back.