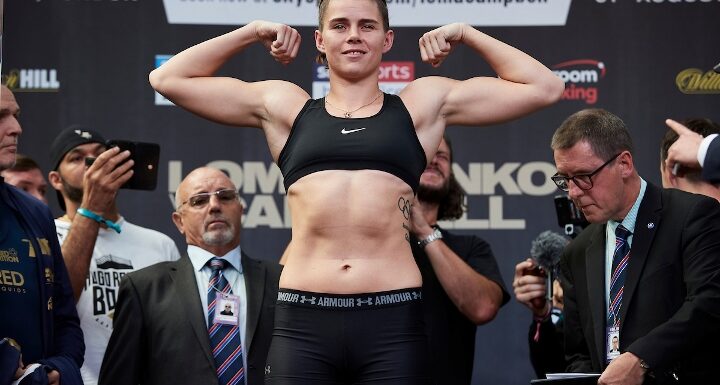 Savannah Marshall defends her WBO middleweight title against Belgian
Femke Hermans in Newcastle on Saturday night with the prospect of an
undisputed world title challenge later this summer against the
American Claressa Shields.

It remains a bitter, longstanding trans-Atlantic rivalry, and one of the biggest match-ups in women’s boxing. After a spicy public ringside tete-a-tete with the American Shields winning on points on her UK debut in Cardiff, in February, Marshall is primed for the defining fight of her career against the two-time Olympic champion. “I just remember watching her [Shields, in Cardiff] and I thought, yeah, she won, and defended her title, and that’s what she went there to do, but you can’t keep ramming down people’s throats that you’re the greatest and you’re going to do this and that and smash someone and then go out there and not do it. Not just that, you can’t critique me every chance you get on twitter and at press conferences and then when it comes to it just expect me to
give you a fist pump. It doesn’t work like that.”

The rivalry with Shields runs deep. Marshall, 30, defeated Shields,
27, to become world amateur champion in 2011. Then Shields won Olympic gold in London, as Marshall crashed out. “It’s been nearly 10 years since we last boxed. So this has been kind of going on for 10 years.
We’ve had little spats on twitter and have come face to face before
but nothing really like that. It’s always been there between me and
Claressa. It’s nothing really new.” Both are undefeated as professional fighters, and Hermans was outpointed over ten rounds by Shields in December 2018.

Marshall (record 11-0 with 9 knockouts) can lay down a marker with a
statement stoppage over Hermans next weekend. “Femke is the best
opponent I will have ever been in with. She’s a former world champion
and has only ever been beaten by world champions. I’ve got a very
tough night on my hands,” Marshall told me. “She’s a switch-hitter and is coming to win. Me and Femke were meant to box April 10 last year and it got to fight week and she tested positive [for COVID 19] when she was about to get on the plane. So the fight fell through.”

Trained by Peter Fury, the uncle of world heavyweight champion Tyson
Fury, Marshall is in very good hands. “The thing I really like about
Peter is he just says it how it is. He has never filled me full of
false hope or made me promises he can’t keep. As brutal as it might
sound sometimes I prefer it that way. If I spar horrific, I want him
to tell me. If something’s not working, I want him to tell me. That
works for me. When he goes on social media and says this or that, it’s
true. Professional boxing is a dirty game and it’s full of broken
promises and things like that. I see myself as being very lucky to
have Peter in the corner.”

Marshall told me: “If I come through Saturday,
all good and well, 100% it will be me and Claressa next.
I believe I will make a statement but I’ll go about the right way.
Break her down, and if the stoppage comes, great.”

Marshall vs Hermans is live on Sky Sports on Saturday April 2.