When Galal Yafai’s life changed forever the biggest surprise was that he wasn’t viewing this sliding doors moment through floods or tears.

“I don’t like any fuss, but I thought I’d be crying when I won Olympic gold, or even on the podium,” explains Yafai as he reflects on his flyweight victory over Carlo Paalam of the Philippines in Tokyo last week.

“When the result came through, I was just shaking my head because I couldn’t believe it. It was a surreal experience, a shock,” the Birmingham boxer told Telegraph Sport. “I don’t feel overwhelmed now, it feels like it’s the beginning of my journey, rather than the pinnacle. That’s my amateur career done, it opens doors, and I have a long way to go as a professional.”

The reaction, though, was something else. Yafai was greeted by a jubilant army or friends and family who carried him through Heathrow Airport, while television appearances mounted as his celebrity soared. The bubble of Tokyo had been burst in the best possible way.

“It was clear from my phone going crazy and all the stuff on social media that winning gold had had an impact outside our Team GB bubble,” he explains. “Then when I got back this week I got a great reception and more recognition for what I’ve done now. It felt good. I had my brother and all my friends and all my family meet me. It was good to see some familiar faces and have them all there to support me and give me a good reception.

“I’ve had loads of messages from people saying I’m an inspiration and I’ve been receiving lots of kind words from people. I don’t know who they are and they don’t know me, to be honest. They’ve just seen me fight. But it means a lot and I’m always happy to tell my story and help people and just do anything to give back.” 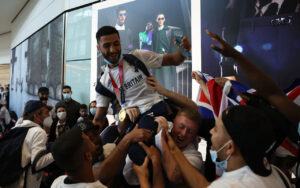 Yafai speaks with a certainty that you might not expect of a man who has had to wait until the age of 28 to give up his amateur status. Part of that is a natural assuredness but it perhaps has more to do with the fact he is the third of three boxing siblings to turn professional. Oldest brother Kal held the WBA Super-Flyweight title from 2016 to 2020 while Gamal is a European super-bantamweight champion, with the two having combined professional records of 44 wins from 47 fights. So when the pair say the youngest of the siblings is now “leading the way” it is clear how far Galal has come in the six years since he was working at Jaguar Land Rover’s Solihull plant.

His mother, Kadega, who raised the three brothers, spoke of her pride at her son’s performances in Tokyo. Of Yemeni descent, the Yafai trio were inspired by the brilliance of Prince Naseem Hamed and the former world champion, Galal revealed, had “face-timed with me” since his golden moment.

“It was great to speak with Naz, he said he was proud of me, and it meant a lot. He was always an idol for the three of us.

“They always say I’m the best of the three but I don’t know if I’d agree,” Galal says. “People are always asking if there’s competition between us but no, there’s no competition. They hope for the best for me and I think Kal was happier to see me win gold than he was when winning his own world title. When I do well, I’m living out their dreams too. I think for the three of us, it takes us back to how we got here, always fighting each other, sparring as kids at home. It was also amazing to be a part of the GB Team that created history with the most medals. It’s also a thrill to know I’ve won Olympic gold like some of my boxing heroes, like Oscar De La Hoya and Pernell Whitaker, and Muhammad Ali.”

And just listing those names shows quite how far Yafai has come since working in the car factory as he found himself bored and unhappy having left school and studied business at college.

“I worked there [at Land Rover] for three years,” he explains. “I was getting parts, delivering parts. Then I got on the Olympic team and five years later managed to get myself an Olympic gold medal. I started the job when I was 20. But two years earlier, I had my first fight. Normally by that age, people are halfway through their amateur career. I had to get a move on. My mum was putting the pressure on me – I had to pay a few bills and what not. I got to 20 and went off to work. I worked for three years, rented a place with my brother, and had to think about life in general.”

So why hadn’t he taken the sport up earlier? “When I was younger, I’d go to the gym for a week, then never go back,” he said. “I was sparring with Gamal and Kal and we were punching lumps out of each other. I’d have a spar, get beat up, and not go back. I went to college to study business. I hated it, absolutely hated it. I hated college. I wanted to become a star in something but I just wasn’t good at anything.

“I remember Gamal convincing me to come to the gym and telling me I’d do well in boxing. I went, won a few fights, but then got to the stage where I needed a job. I was 18 or 19 then. I almost fell off. My trainer Frank O’Sullivan said to me in 2015, ‘you can go to the next Olympics’. I thought, ‘Frank, you’re crazy. You’re my trainer and are just saying that to give me a bit of confidence’. How am I going to the next Olympics when I’m not even on the team? But yeah, he was right. The next year I was at the Olympic Games.”

And Yafai – who is planning to take a month off before getting back in the ring – believes his rise is a lesson to anyone who wishes to succeed.

“It’s clear for everyone to see that persistence matters,” he said. “I kept going and going. There were times when I hated boxing and was getting nowhere with it. My mates were going out and enjoying themselves and I was having to lose weight and sacrifice going out to compete in silly little championships or box on club shows. Now I know that it does pay off, and I have a career ahead of me with the perfect golden launch pad.”