The match-up between two former Olympic gold medallists will take place in front of 60,000 fans at Spurs’ new home in September

Anthony Joshua will defend his IBF, WBA, WBO and IBO heavyweight titles against Oleksandr Usyk at Tottenham Hotspur Stadium in front of 60,000 fans later this year, it has been confirmed.

The bout on Saturday, September 25 will be the first boxing match in a stadium in the UK since the Covid-19 pandemic broke out in March 2020.

In a match-up of two former Olympic gold medallists from London 2012, Joshua (24-1, 22 KOs) meets the Ukrainian who is the WBO mandatory challenger.

The bout at Spurs’ new home has a touch of history repeating itself after Matchroom maestro Barry Hearn promoted Frank Bruno’s victory over Joe Bugner in the promotional company’s first heavyweight match-up at the old White Hart Lane in October 1987.

Joshua, who was in talks to fight for the undisputed heavyweight title with Tyson Fury until a contractual arbitration ruling forced Fury to meet Deontay Wilder for a third time, has not fought since December when he stopped IBF mandatory challenger Kubrat Pulev by ninth-round knockout at The SSE Arena.

“The date is set and we are fully locked in,” said Joshua on Tuesday. “September 25, Tottenham Hotspur Stadium, I put it all on the line again and it’s time to defend my crown. We are two Olympic gold medallists who have fought our way to the top and never avoided challenges.

“The stadium is exceptional, the atmosphere will be electric, I’m honoured to be the first person to fight in such an awe-inspiring venue. The stage is set and I am ready to handle business.”

Undefeated Usyk (18-0, 13 KOs) moved his aspirations to the heavyweight division after dominating at 200lbs as the undisputed cruiserweight champion. Thus far, the clever southpaw has stopped Chazz Witherspoon in seven rounds and outpointed Derek Chisora over 12 rounds at The SSE Arena last October. Usyk, often a man of mystery, said: “The path will be mastered by the walking one.” 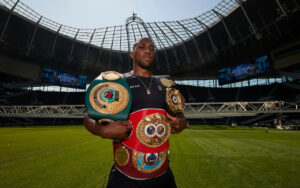 Eddie Hearn, the chairman of Matchroom Sport, believes it will be a massive occasion: “Olympic gold vs Olympic gold, unified world heavyweight champion vs undisputed cruiserweight world champion, this one has it all and I can’t wait to stage this huge event in front of over 60,000 at the stunning Tottenham Hotspur Stadium on September 25.”

Tottenham chairman Daniel Levy added: “This is a huge occasion for Tottenham Hotspur Stadium – Anthony Joshua is an icon in the world of sport and to have him fight here in London N17, against a top opponent in Oleksandr Usyk, will be amazing for the area of Tottenham.

“This event will once again showcase the stadium’s ability to take the hosting of world-class sporting occasions to the next level – we cannot wait for September 25.”

Analysis by Gareth A Davies

Joshua faces a dangerous assignment against Usyk, who is a clever mover, has great feet, and fights from the southpaw stance.

Usyk has not yet shown any great power at heavyweight, but the Ukrainian, who has never been defeated, is without question a test for Joshua, if the reigning champion fails to dominate.

The strengths for Joshua are obviously his size and power, and while a battle of the jab is not what he will be looking for, the Watford man can keep Usyk at bay with his jab, before the opportunity to get away his power punches.

If the two men reach the championships rounds together, Joshua may well have failed to impose himself in the fight, which he ought to be able to do.

Derek Chisora went after Usyk early, and made him uncomfortable. At this point, I’m picking Joshua to stop Usyk at the 9-round mark. But there could well be a few bumps along the way, just as it is impossible to write Usyk off. Good fight, good test for AJ.