Canelo defeats Saunders in eight rounds, the Brit stopped with area around his right eye discoloured and sunken

Saul “Canelo” Alvarez has taken another step towards becoming undisputed champion of the super-middleweight division by adding the WBO belt of Billy Joe Saunders to his WBC, WBA and Ring Magazine belts. He stopped the Briton on his stool after eight hard-fought rounds with the right eye socket or cheek broken by the Mexican’s huge uppercut in front of a record indoor crowd of 73,000 at the Dallas Cowboys Stadium in Texas.

Saunders was in no position to continue, with an area around his right eye discoloured and sunken.

To that point, it was a competitive fight with many of the rounds close, though it was Canelo’s power punches which told, as slick southpaw Saunders moved cleverly and kept himself in the fight by making the Mexican, who targeted the body early, miss with most of his power punches. But Canelo, working his way into the fight, and looking for openings, had seen Saunders ducking low as he moved and swayed with his head, and capitalised ruthlessly.

Canelo, regarded as the number one fighter in the sport, hunted Saunders down throughout the fight. Although the British fighter showed great skills and timing – putting the revered champion on the back foot at times – and, near to the shifting point in the fight in the eighth round, found a rhythm and was keeping Canelo off him.

Then the uppercut came into play, and several of them landed in the eighth, bringing the contest to a close.

In the post-fight interview on the DAZN digital platform, Canelo said that he had felt that he had broken his 31-year-old rival’s cheek or orbital bone.

“As I said beforehand, the fight was going to develop by the seventh or eighth round. That’s what happened. But it wasn’t as difficult as I expected. That’s where I take note that my preparation is good, and I improve day-by-day,” Canelo said. 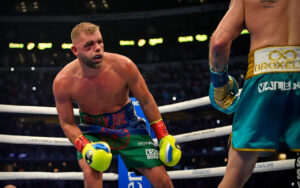 “The fight I was winning round-by-round. I told you, my fight would develop after six or seven rounds. But I started getting adjusted quickly. “I knew that this [the eighth] was going to be the final round. But I knew it. I think I broke his cheek, and I knew he wasn’t going to come out. That was it.

Promoter Eddie Hearn said of Canelo’s stoppage of Saunders: “He couldn’t see. I spoke to Mark Tibbs [his trainer], he said he couldn’t see and he wouldn’t let him go out. He busted his eye socket.”

Saunders was taken by ambulance immediately after the fight for medical checks at a local hospital.