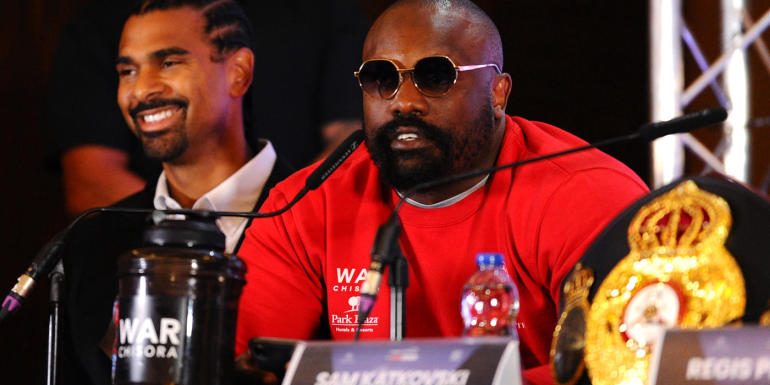 Derek Chisora’s camp threatened to pull out of the fight, after he lost the coin toss and will have to walk out first in Manchester

Derek Chisora is the self-proclaimed “moneyweight” champion of boxing so it came as little surprise that it was a coin that riled the Finchley fighter.

His camp made the absurd claim that Saturday night’s fight with Joseph Parker may not go ahead after he lost the toss to decide the order of the fighters’ ring walks at The AO Arena in Manchester.

David Haye, the former heavyweight champion who once brawled with Chisora at a post-fight press conference but who now manages his fellow Brit, called incorrectly. It meant Chisora was slated to come into the ring before New Zealander Parker. “I genuinely can’t see the fight happening, if Derek is told to come first,” Haye then said.

“I know it makes zero sense. He agreed it, he signed the contract. He’s just that guy, he doesn’t care, and unfortunately that’s just the way it is.”

The row erupted at the weigh-in on Friday night, where Chisora tipped the scales at 17st 12lbs, nine pounds heavier than Parker.

“Either I come in second or I’ll go home right now!”

What makes Chisora’s claim even more fantastical is that this fight has already been pulled once and has been 18 months in the making. It was Parker who withdrew from their first scheduled bout – citing the effects of a spider bite while in training camp in Las Vegas – which Chisora this week wrote off as “cold feet” from Parker.

“The guy had a spider bite, we can’t deny it, we don’t know if it’s true or not, and he pulled out, but he had it and now he’s here – we’re not going to cry over spilled milk,” he told the Telegraph.

For the Londoner, this fight represents an opportunity to finally gain victory over a world champion, following defeats to world champions Vitali Klitschko and Tyson Fury, twice, and establish himself as a boxer with a legacy beyond the headline-grabbing but ultimately pointless wild brawls.

Parker, meanwhile, fighting for the fourth time in the UK, after victory here over Hughie Fury in a defence of his WBO heavyweight crown, but following losses to Anthony Joshua in a title unification and to Dillian Whyte in an old-fashioned ding-dong thriller that went into the trenches, has pledged that he will bring a more aggressive style under new trainer Andy Lee, the former middleweight world champion who is assistant trainer to Tyson Fury.

Parker said: “I believe I will stop Chisora in this fight. Physically and mentally, I’m in a great place – probably the best I’ve been in a while. It’s been a great camp with Andy. With Derek it’s no secret, he’s going to come forward and apply the pressure, throw punches everywhere. My hands are going to have to be up, down and all around.”

We know what Parker (28-2, 21 KOs) has done in the past, how he sits comfortably in the ring behind his jab, and counters off his opponents.

We know what Chisora (32-10, 23 KOs) does, belligerently walking opponents down to throw arcing hooks and use his physicality a great chin.

Chisora’s style might play into the hands of the sharp, countering New Zealander who I believe will be more aggressive with his faster hands.

My pick is for Parker to win by stoppage between rounds 8 and 10, if he can avoid an early firefight with the big Briton.