Plus, Conor Benn moves to 18 fights undefeated after making huge statement by halting the experienced Samuel Vargas in first round

An emotional Shannon Courtenay claimed the vacant women’s WBA bantamweight title with a fine points victory over Ebanie Bridges at the Copper Box in London on Saturday night. After a back and forth war of words in fight week between the two fighters, the ‘Blonde Bomber’ from Australia and ‘The Baby Faced Assassin’ from Watford, it was some spectacle. They talked the talk and walked the walk.

Courtenay claimed the word title by unanimous decision on the judges’ cards 97-94, and 98-92 (twice) with a skilful fight in which she twice had the Australian hurt. But by any standards, it was an entertaining, all-action contest.

A tearful Courtenay said afterwards: “I can’t put it into words. Unbelievable. To be someone who has genuinely turned their life around, I boxed nicer. I had the cuter shots. She was trying to knock me out. I think the jab won me the fight. When I boxed, I won the fight. Eddie’s the boss. I was told the Rachel Ball rematch was next. So Ball next.”

“Every fight she is in is entertaining,” said Hearn. “It’s only fair it’s Shannon against Rachel Ball next.”

After a week of bitter words, there was little feeling out process in the opening round, both women employing the jab early. But it was Courtenay who commanded the opener with her counters as Bridges advanced. Bridges, a former kick boxer, body builder and a Maths teacher in Australia, was out early with pressure in the second via the double jab, walking the Watford warrior down and landing excellent uppercuts. Courtenay ended the second round with a cut above her left ear, as Bridges poured on the pressure to even up the battle. 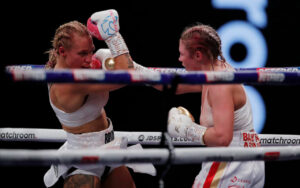 The former Watford wild child, reformed by boxing, had her own successes in the third, landing flush with counter hooks in the third, but it could not deter the physically tenacious Bridges from walking her opponent down in a close fight. It was a battle of Bridges tenacity and Courtenay’s lighter footed skills. They went toe to toe in the fourth, mainly in the centre of the ring, but it was the British fighter who appeared to be edging ahead with her better movement and footwork, allied with cleaner punches.

Then the most significant moment of the fight. A huge right hook pinpoint on the chin from Courtenay buckled the legs of Bridges in the fifth round, though the overseas fighter held on. Bridges, her left eye swelling, refused to be denied in the next period, advancing and letting her hands loose, as the British fighter worked her boxing skills. After six rounds, on my card, I had Courtenay 4-2 up in the contest. The action was heated and intense in the seventh, Bridges coming back into the fight with a good round as they traded leather. Two left hooks and a right hand over the top were testament to the Australian’s desire to become a world champion. Her left eye closing, Bridges stuck to the Briton, as the intense power struggle continued. It looked all square after the eighth round, the fight edging into the zone of who would have the greatest reserves of stamina, will and desire.

With no let up in the action, Courtenay poured on the pressure on the exhausted fighter from Sydney, although the Briton was caught wide open with a left hook on the bell. The final round brought the best out of the two warrior women, as they gave the final two minutes everything they could must from the depths of their fighting spirits.

Also on the card, Savannah Marshall, from Hartlepool, defended her women’s WBO middleweight crown against late replacement Maria Lindberg, of Sweden. Marshall, the 6ft tall ‘Silent Assassin’ drooped late replacement Lindberg with a long right hand in the second round and then dropped her opponent again in the third, utterly dominating the Swede, alternating smoothly between head and body shots.

Elsewhere on the card, Welterweight Conor Benn moved to 18 fights undefeated with his twelfth knockout victory, making a huge statement by halting the experienced Samuel Vargas in the first round on Saturday night.

Benn was immediately on point, throwing out his jab in the first forays, before punching through the guard of the Colombian. But it did not take long for the son of Nigel Benn, ‘The Dark Destroyer’, to go to work with emphatic effect.

But sensing he was on top, Benn started a vicious assault with heavy hands peppering the overseas fighter, his head rattled on the ropes, leaving no alternative but for referee Mike Alexander to stop the contest, in his view with Vargas in no condition to continue.

Vargas seemed to be fine at the time of the stoppage. Because Vargas was not doing much to defend himself and was taking continuous punches, he may have forced the referee’s hand.

“Statement made. No one banged him out in one round. Easy. Give me Amir Khan next, never mind these Reality TV shows. I wanted to show 99 per cent accuracy. The power is coming, and there is a long way for me to go,” said an excited Benn afterwards.