Josh Warrington’s return to the ring after vacating his International Boxing Federation featherweight title ended in a brutal ninth round knockout for Mauricio Lara, the unranked 22-year-old Mexican, and will likely have serious consequences for the Leeds fighter’s career.

The move to vacate the belt in order to challenge the division’s other world champions backfired horribly for a number of reasons, though the old adage that you should ‘expect the unexpected’ was in full flow at Wembley Arena as live boxing made its return after a two-month enforced lay-off due to the national lockdown.

Warrington had been out of the ring for 15 months, and his inactivity, something many fighters are having to cope with at the moment, was clear to see. The former champion’s strategy of trading leather from the opening bell against a fighter eight years his junior proved to be reckless when he was floored in the fourth round having left himself open.

Should referee Howard Foster have stopped the contest then, with Warrington’s senses scrambled and the boxer clearly in deep trouble? Ordinarily, yes, but factor in his staying power shown many times in past fights, and the facts he was the home fighter and a world champion, and it’s easy to understand Foster’s thinking.

The five further rounds that Warrington battled on for – using his fitness, instincts and champion’s heart to keep him in with a slim chance of turning the fight around – may cost his future career and health dear. But Sean O’Hagan, his trainer and father, could also have thrown the towel in at any point from the fourth round on. He is the man who knows Warrington best. 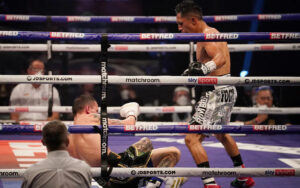 The defeated favourite was examined ringside, given oxygen by ringside medics, and was subsequently transported away from Wembley for more checks at hospital.

Perhaps Lara’s fighting sobriquet of ‘Bronco’ – meaning wild horse in Spanish – should have been a warning sign against meeting the Mexican head-on. Lara had also knocked out 15 opponents in 21 previous victories. Warrington is a smart fighter – and not a power puncher, evidenced by just seven KOs in his 30 victories – and easing his way into the contest would have been far more sensible than going for it from the start.

For Lara, not even ranked in the top 15 by any of the four world sanctioning bodies before the fight, the victory propels him now as a dangerous name in the 126lb division. The options offered by promoter Eddie Hearn to Warrington include a rematch with Lara, though that wouldn’t be for several months, and is arguably ill-advised straightaway.

Having lost for the first time in 31 contests in an 11-year career, Warrington – who fought back bravely on Saturday – will have to rebuild his ambition to pursue the division’s other world champions – Gary Russell Jr, Can Xu and Emanuel Navarrete.

It was not a great night for the boxing officials overall. Earlier at the SSE Arena Zelfa Barrett faced the toughest examination of his career against the vastly experienced Kiko Martinez, retaining his IBF Intercontinental super-featherweight title. But the victory came by dint of a hugely controversial points victory – 118-111 twice and 116-113 – in a contest in which the Spaniard was consistently the aggressor, and looked to have won the fight.