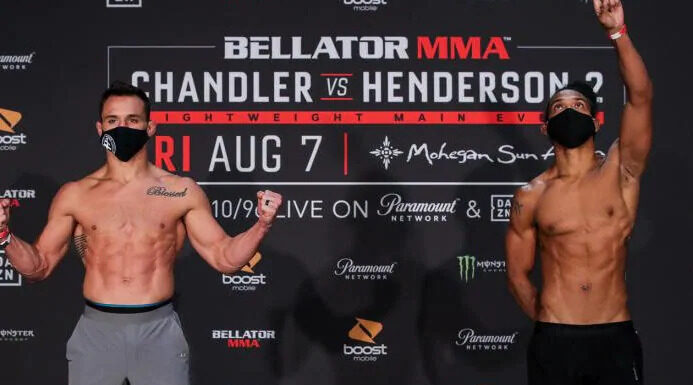 National broadcaster will show all Bellator events in 2021, in a major advance for the sport

Cage-fighting has been given a regular spot on BBC television after the national broadcaster signed a deal with Bellator, one of the sport’s two main promotion companies.

The announcement means that all of Bellator’s 2021 events will be shown live in the UK on BBC iPlayer. The move is the latest sign that BBC bosses view fight sports as value for money for the licence fee payer.

The deal follows a successful trial last October, in which a Bellator event from Paris was aired on the iPlayer — the first time the sport had been shown on the BBC.

Scott Coker, the president of Bellator MMA, said that he was “thrilled to be confirming the BBC as our UK broadcast partner.”

“To have every event on the biggest network in the UK is a great opportunity,” said Coker. “We look forward to working with the BBC to bring our exciting roster of talent and our extensive events schedule to an ever-growing audience.”

Ben Gallop, Head of Digital at BBC Sport added: “Following on from the success of the Paris show we are delighted to continue our partnership with Bellator. We look forward to bringing live, free to air Bellator action to both existing and new fans of MMA on BBC iPlayer.”

The first Bellator event of 2021 is scheduled for Friday 2 April at the Mohegan Sun Arena in Connecticut, USA. The organisation has set up residence there since last year with a Covid testing bubble in place and no crowds in the arena.

The headline bout is a featherweight title fight between the champion Patricio ‘Pitbull’ Freire, of Brazil and the American Emmanuel Sanchez. Three further events will take place in April and May, including a light-heavyweight tournament featuring eight of the leading fighters, among them Bader, Anthony ‘Rumble’ Johnson, Yoel Romero, the Russian champion Vadim Nemkov, and Phil Davis.

The tournament culminates in October this year, when European events are likely to have returned, Covid restrictions permitting.

Bellator MMA, a mixed martial arts league of male and female fighters founded 13 years ago, is owned by ViacomCBS, the US multinational media conglomerate, whose revenue was almost $28 billion in 2019.

The powerful commercial partnership between Bellator and the BBC is a clear marker of the global growth of a sport which is not yet three decades old.

No longer is MMA the scruffy cousin of the sporting landscape. It has become mainstream. All this just 15 years after the corporation’s sports editors had refused to cover the sport on the BBC website. Time, interest, and growing professionalisation have clearly changed attitudes.

David Green, the head of Bellator Europe, told Telegraph Sport that the BBC’s alignment with Bellator was “a clear statement of intent” and “a ground-making moment for Bellator and MMA as it continues exponential growth with broadcasters and fans”.

Green added: “We’re thrilled to be able to bring live Bellator MMA action to millions of UK homes on BBC iPlayer. To have every event from all over the world available for fans in the UK to watch live is something we have been working really hard to achieve, and to be able to call the BBC home for Bellator in the UK is really a fantastic moment for us and for the sport.”