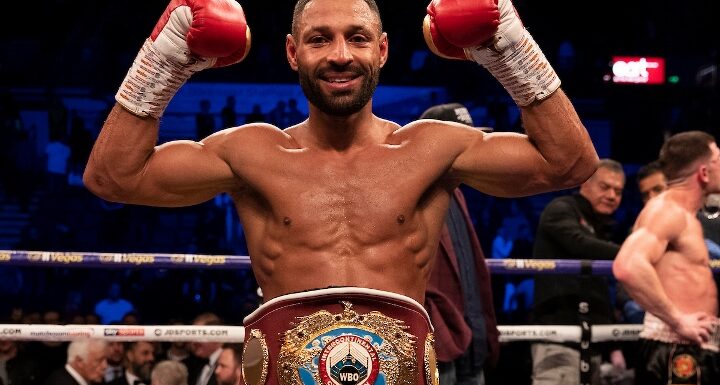 Crawford, the WBO welterweight champion from Omaha, is undefeated in a 36-fight career across three weight divisions

Kell Brook played down the enormity of his task against Terence Crawford in Las Vegas on Saturday by saying he would win their World Boxing Organisation welterweight title fight by knockout.

Crawford, the champion from Omaha, is undefeated in a 36-fight career across three weight divisions. He has looked imperturbable against every style and size put in front of him, switch-hitting his rivals with a clean precision.

Brook, from Sheffield, has lost just once at welterweight in his 41 fights, to American Errol Spence, when Crawford was a keen observer. “You can look at little bits of pieces of that fight, but at the same time I don’t think me and Errol Spence have the same style of fighting,” Crawford said. “I don’t think Kell Brook will fight me the same way he fought Spence.”

Brook suffered a broken orbital socket in the defeat. Will it have affected him?

“Given he went up and fought Triple G [Gennady Golovkin] at 160lb, having those two significant eye injuries delayed his stay at welterweight, given that he was already outgrowing the welterweight division,” Crawford said. “Going to fight Triple G and then Errol Spence in back-to-back fights is tough on your body. But that fight [with Spence] was a long time ago and I’m pretty sure Kell has learnt from his mistakes. He’s going to come in a better fighter than he was with Spence.”

Brook, who says he has had the best camp of his life in Las Vegas, certainly thinks so. “He’s going to know he’s in with a solid, fully-fledged welterweight with power in each hand, who’s got great timing, who’s got a great jab, who believes he can win, who’s been in with the best fighters in the world and who’s got great experience,” Brook said.

“I know what it takes to be champion of the world, I know what I need to do. He is very, very good, but I think they are getting carried away with him. I don’t believe the hype. He’s got to show me why he’s a top pound-for-pound fighter because I don’t believe he is what they are all calling him out to be.”

Brook says this is a special moment. “Every fighter dreams about fighting at Madison Square Garden or the MGM in Las Vegas. I am fighting there, it’s just with this Covid situation. I would have loved the fans to be there, of course. I draw strength from the fans and the crowd, but it’s going to be the same for him.

“I’ve been doing it since I was nine and to see myself up in lights in Las Vegas is what dreams are made of. To be on the platform of all the legends of boxing – Mike Tyson, Muhammad Ali, Felix Trinidad, Oscar De La Hoya, Fernando Vargas, Bernard Hopkins, the Mayweathers. It’s a moment for greatness. I’ve got to be the best I’ve ever been to beat Terence Crawford. I know what I’m going in there against and I know what I need to do and I believe I can get this job done.

Brook believes he will stop Crawford. “I believe I will. He’s been stiffened up before and he has not been in with someone who is as accurate and has the power I have who can finish the way I can finish. I’m tuned up, I’m a Ferrari, I’m ready to rise up to the top of the sport.”

While Brook will look to leave it all in the ring on a night that could define his career, Crawford has a legacy of his own he is pursuing.

“When people look back at my career, they will see a kid who started from ground up, from Nebraska who became the first world champion of his whole state. Who went on to become undisputed, No 1 pound-for-pound fighter in the world that never ducked or turned down any opponent. That’s what my legacy will be remembered as – one of the greats. One of the best switch-hitters of all time.”

Brook, meanwhile, could retire happily with victory. “I could happily retire knowing I’ve beaten the best out there. What else do you want from me? I’ve beaten the king of boxing.” To do so, Brook must find perfection in this fight.