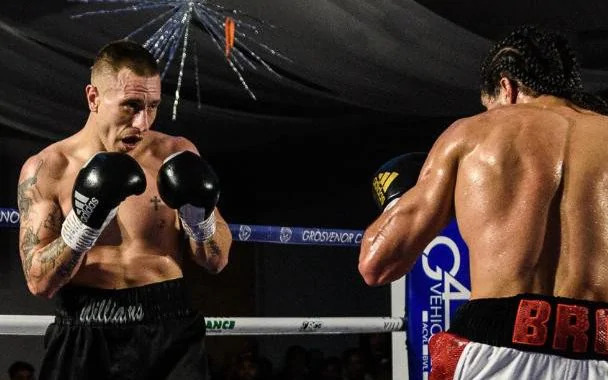 Scott Williams faces the conundrum that many journeymen boxers now have to contend with: small-hall shows, relying on ticket sales, seemingly having no route back for many months ahead.

Three renowned UK small-hall show promoters told Telegraph Sport that, due to Covid-19, “it could be up to a year” before they return.

Williams, 31, who has had “around 400 fights in all” from amateur to unlicensed contests, joined the professional ranks full-time last year, having left his job in a call centre offering life insurance. But in the current climate, the Manchester-based fighter says that “life is a double-edged sword with no answer”.

The reality for the journeymen is that few fights are now viable. These are the boxers who fill up the lower portions of the biggest fight cards, who are wizened in the ring and have rising stars matched against them to learn between the ropes. Even in busy times, most are resourceful and have second jobs.

While Frank Warren hosts events at the BT Sport studios, and Eddie Hearn plans for Matchroom Boxing’s four shows next month on the 15-acre lawns of the company HQ in Brentwood, Essex, the small-hall show promoters have nothing for the likes of Williams.

“I left my job last year to box full time. It was too hard to train properly with a full-time job,” explained the father of three children under 12.

“It has been very tough mentally during lockdown. I split up with the mother of my children a week before the government lockdown came into being. I’ve been running every day, doing circuits, improvising with my boxing training, just to be ready if the call does come… ”

Williams does not want to go back to work, at the risk of not being ready to box, but he has reached out to his former employers. “I have rung the call centre, but you have to work from home now and you need a laptop computer to do it and I don’t have one. It’s a Catch-22. Not having a job, sitting about, plays on my mind. I’m trying to leave going back to work until the last minute, because I want to be ready.

“I’d have a fight in a back garden right now. If I was called up to be on a Frank Warren or an Eddie Hearn card I would snatch up the opportunity in a moment.”

Likewise, fellow journeyman Ryan Hibbert, like many others, is focusing on a secondary job. He works in flood prevention management, but that had not stopped him having five fights this year before the pandemic lockdown.

“I’m proud to be called a journeyman boxer,” explained the 27-year-old light-heavyweight from Manchester. “We are part of the lifeblood of the sport. We are not all pay-per-view stars, but the boxing is still in our blood. I’m still ticking over with pad-work, running and strength and conditioning. But for me there’s not a fight in sight.”

Chris Jenkinson, who fought 11 times last year and has boxed three times this year, having had 89 professional fights, has taken to floor tiling with his brother’s business.

“I really wanted to get to 100 fights this year, but I clearly won’t now. But I do feel like one of the lucky ones as we are really busy with the tiling company,” said the 37-year-old super-welterweight from Bolton.

The reality of future events for boxing’s journeymen is put into perspective by three of the UK’s leading small-hall promoters. Steve Woods has 65 boxers on his books. “Right now, all of our boxers are going to have to get jobs, because under the British Boxing Board of Control and government guidelines we will not be able to do a show safely,” Woods said.

“Nor would I take that risk for anyone. A lot of our boxers work as PT instructors in gyms and obviously they can’t do that at the moment either.”

Steve Goodwin, a small-hall show promoter who also works as a financial adviser, holds 15 events a year, mainly around London, and has 101 boxers on his books. He has spoken to all of them during the lockdown. “My instinct is that it will be next year that we will be back, probably March,” he said. “And I think that is dependent on an effective treatment or a vaccine. Without that the delay to small-hall shows will be longer.

“What chance have we got of getting 1,500 people to come to the York Hall, in Bethnal Green at the moment? I’m telling most of my fighters not to rely on boxing at the moment and get themselves a job.”

Micky Helliet, another small-hall show promoter who has 70 boxers on his books, has had to cancel six events already, and was looking at October to stage a show, but said that “there is no way even for that five months away for me to be able to plan without an audience”.

The only way that small-hall shows could go ahead at present, insisted Helliet, is through the generosity of sponsors. “Our business is underwritten by ticket sellers. The only two promoters who can do shows under the present protocols are Warren and Hearn.

“Obviously we want to keep our boxers active, but the bigger picture right now is that we need to keep humanity alive. The brutal truth is that we are in a very difficult spot right now in this area of the sport.”