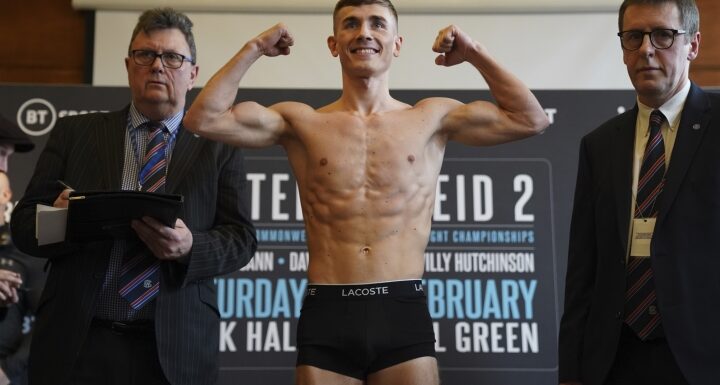 Brad Foster emphatically retained the British and Commonwealth super bantamweight titles on points against James Beech Jnr at BT Sport Studios in East London as boxing returned – behind closed doors – after an 118-day absence due.

Brad Foster emphatically retained his British and Commonwealth super bantamweight titles on points against James Beech Jnr in a behind-closed-doors return for boxing at BT Sport Studios in East London – after an 118-day absence.

Under the banner of Frank Warren’s Queensberry Promotions, the unusual silence, the crack of body shots and boxers breathing heavily, underlined the new reality of the sport without spectators.

Former kick-boxer Foster – delighted to be back after working night shifts in Tesco during the lockdown – claimed his British Lonsdale belt outright after three defences with a fine, technical performance over Beech and maintained an unbeaten 13-fight record. Foster won 116-113 and 117-111 twice on the judges’ cards.

Portsmouth lightweight Mark Chamberlain was first into the ring and produced a left-hook knock-down of Stuart Greener just 55 seconds into his sixth professional fight.

“It was a bit different, a bit like sparring, but you have to put it to one side. Whether it is 10 people or 10,000 people there watching you have to shut it all out because it’s just you against your opponent” said Chamberlain, who moved to 6-0 in his career, with four knockouts.

Elsewhere, there were stoppage wins for heavyweight David Adeleye – a sparring partner for Tyson Fury ahead of his second fight with Deontay Wilder in Las Vegas – and super-welterweight Hamza Sheeraz. Between bouts, the ring canvas, ropes and corners were sanitised, while the referee, wearing a mask during the action, showered and changed clothes. There were 104 COVID-19 tests taken from last Saturday until Friday night – all returning negative results – with 65 boxers and auxiliary staff from medical, to Boxing Board of Control, to television crews, inside the venue.

The next live show in the UK takes place on Saturday July 25 headlined by heavyweight prospect and former Olympic silver medallist Joe Joyce (record 10-0) who faces the German heavyweight Michael Wallisch (20-3, 13KO’s) in a ten-round contest, also on BT Sport.

Elsewhere, promoter Eddie Hearn on Friday predicted a tough time for boxing with “fighters leaving the sport” unless competitive cards and compelling promotional matchups are made in the coming months behind closed doors yet insisted his company is still aiming “to become a global powerhouse and the UFC of boxing”.