Dillian Whyte insists no amount of money could persuade the former Brixton bad boy to “step aside” and allow Tyson Fury and Anthony Joshua to contest the richest fight in British boxing history.

It will have been one thousand days waiting as the No1 challenger for the World Boxing Council crown when Whyte faces the Russian Alexander Povetkin on August 22, behind closed doors in the grounds of promoter Eddie Hearn’s Matchroom Boxing headquarters in the Essex countryside. It is 15 miles from the O2 Arena where Whyte has made his name in the last two years, but more to the point, an interminable distance waiting for his moment on the fully-lit stage of success.

It is some resolve Whyte has shown, with an ambition of becoming a heavyweight world champion running deep in his blood.

But he has now become the immoveable object and the obstacle standing between the much-hyped, apparently “agreed” pair of fights between Fury and Joshua, sometime, somewhere, in 2021, and a contest that could gross an estimated £150m. Whyte, speaking from his training base in Portugal where he has been ensconced during the coronavirus pandemic lockdown, where he has been tested regularly for COVID-19 and voluntary anti-doping tests, insisted: “Nah, there’s to be no step-aside. I’ve waited long enough. I’m not getting any younger, I’m getting older. I just want to be world champion and reign and unify. So the sooner I can get the world title the sooner I can go about that. So, no I’m not looking to step aside at all.”

Whyte’s case was strengthened on Sunday when WBC president Mauricio Sulaiman confirmed that Fury’s world-title fight with Whyte “could happen” this year if the American Deontay Wilder decides not to go into the trilogy fight with Fury for the WBC belt on December 19, with reports that he is recuperating from bicep surgery.

Sulaiman told Sky Sports: “It could happen if they reach an agreement. The third fight [Fury-Wilder] and then the mandatory must take place. The WBC’s position and ruling is as I stated.” 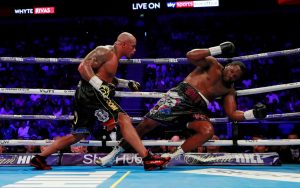 Even Hearn has suggested in the last week that Whyte’s title fight should take place before Joshua-Fury, which will not be staged until mid-2021 at the earliest.

Whyte believes he has the right tools to defeat Fury – claiming that he had knocked him down twice in sparring several years ago – and has the know-how to unhinge Joshua. “With a full training camp I believe I’ll stop Joshua. Like was shown in the Andy Ruiz fight, if you hit him and you’re relentless, he gets stopped.”

Whyte was a contestant on Masterchef last year and revealed he even learnt something about himself on the hit television show: patience. The fighting spirit who came to the UK from Jamaica as a young teen having grown up in abject poverty, and whose only career blemish on his 28-fight career record is that defeat to Joshua five years ago, explained: “Patience can convert into all walks of life. As I become older I become more patient and concentrate more. It definitely does help.”

For now, though, the only hurdle in Whyte’s route to glory is a former Olympic gold medallist and two-time world title challenger, who himself has only tasted defeat against Joshua and Wladimir Klitschko.

“Look, everyone I’ve faced is dangerous,” explained Whyte. “Povetkin is probably the most seasoned guy I’ve fought, with the most decorated pedigree out of all of them. He’s a very tough, strong man, he’s got very good punch power. We’re both front foot fighters and he’s still got a lot of ambition left.

“He knows if he beats me he gets a major pay day and a shot at another world title. I think this will probably be the best Povetkin we’ve seen. This is a major fight, no tune-up fight. And with victory, I’ll be pressing for that world title.”