Amy Hardcastle is doing her best to pick up more shifts than usual as a healthcare assistant in the A&E department at Calderdale Royal Hospital in Halifax.

“I’m lucky because I’m part-time,” says Hardcastle, who captains Bradford Bulls in the Betfred Women’s Super League. “All the full-time staff have had their annual leave taken off them, they can’t take any holiday until June. It’s shaken a few people because they need their breaks. I do feel for them and that’s why when I see a shift come up, I’ll go in and do a bit more than others because I’ve got that bit more energy.”

Every few hours while on shift, Hardcastle and her exasperated colleagues are made to go for drink breaks. “We’re getting more dehydrated because we’re not drinking as much,” she says. “We’re not allowed to have any bottles around the ward. With the paper masks on, you’re just breathing in carbon dioxide all the time, so your mouth does feel quite dry.”

As a mum to nine-year-old Olivia, Hardcastle’s maternal instinct is providing a lifeline for those fighting the disease.

“I had a chap last week, an elderly man who was really frightened,” she recalls. “He had been tested, although we didn’t know at the time if he was Covid positive. He was showing all the symptoms of a Covid patient. I had everything on, all the PPE, and I just spent 10 minutes comforting him. 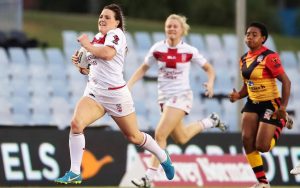 “I put my arm around him and just fed him some Weetabix and made him a bit more settled. I had quite an emotional evening after that because you’re thinking, ‘You could be the last person they’re seeing.’”

As the only England player to be selected for the National Rugby League’s women’s team of the decade, Hardcastle is eyeing her third World Cup next year. The 31-year-old has struggled to keep up her fitness due to the increased work demands, which have been made easier by her experiences in sport.

“Working in A&E and playing rugby are so similar because it’s such a team thing,” she says. “Even when you’re having the hardest time on a rugby pitch, you’ve just got to show everybody, even though on the inside you might not be feeling great, you’ve got to keep smiling, encouraging and supporting all the staff around you.” 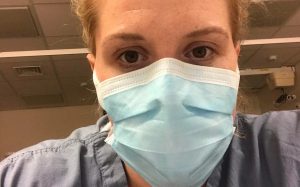 In normal circumstances, Ellie Scotney would have been celebrating her professional boxing debut on an Eddie Hearn Matchroom Boxing card at the O2 Arena, in London Docklands, last week.

However, the 22-year-old from Catford was back at her day job as a part-time worker at B & Q, where plumbing and electrical supplies are deemed essential.

When not at work, the super-bantamweight boxer’s hour of exercise is a run through south London. The young woman who took up boxing at the age of nine “as a little fat kid” is convinced she has found her calling, especially as at the warehouse she even gave herself a black eye recently when she stepped on a rake.

Does Scotney feel she is making a difference? “It would be if I was really making a big difference. You’ve got your NHS workers; for me to be essential compared to them is quite strange.

“I’m in hardware, screws and plumbing. They don’t let anyone in. It’s just collection.” 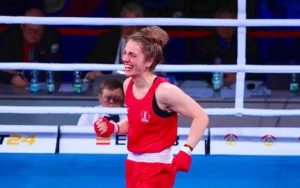 Naturally, Scotney was disappointed her fight on March 28 was called off. “It was gutting. It was also a day out from my birthday. I turned pro the end of last year, after 40 amateur fights. I was on the GB squad set-up.

“I went through my first pro camp, in the gym from October training full on until the debut. So I put everything into it.”

Scotney does acknowledge, though, that there is a bigger picture right now. “I just have to think something better will come along. It’s been hard, because you can’t be in that gym environment. You’re not getting that sparring done.

“I’m just trying to get my routine back. I’ve managed to sort a bag out from my sponsor, so that’s good. It’s in the garden. I had a nightmare putting it up. The pipe got loose and it was spraying everyone.” 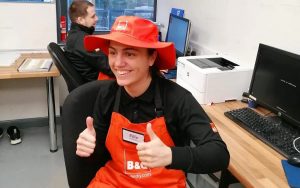 Women’s boxing is on the rise? “A thousand per cent. The amateurs are getting there, definitely. Boxing is still very old school,” she explains.

“I think there’s more to prove for us. I know times are moving on. When you look at boxing and it’s fighting, and [old-school norms] comes with it. I feel it’s changing with time and with the likes of Katie Taylor and Nicola Adams, I’m looking forward to being part of the movement.”

Abbie Fleming spent Easter Saturday and Sunday working in the intensive care unit of the Princess of Wales Hospital in Bridgend. The physiotherapist is taking on duties as part of the on-call respiratory rota, rather than spending her weekends playing rugby.

The back row who earned her first Test cap for Wales against Spain in November is doing a job that those outside of the NHS may find distressing as she works as part of a proning team, whose job it is to help position seriously ill patients flat, so they can breath more comfortably on ventilators.

The 24-year-old shows maturity beyond her years and says it can be mentally challenging, but takes solace from her more senior colleagues.

“It can be tough at times, but there is a lot of support from everyone you work with, in that way it is a bit like a rugby team,” she says. “We all come from different places and have different roles in the NHS, but we work together. I really like that aspect.”

She takes great pride in explaining how she helps comfort those who have been taken most ill with coronavirus.

“Following on from the information we have received from other countries; it has shown that with Covid-19 patients, their ventilation can be a lot better when they are lying on their front,” she says.

“We work in teams of seven, there is a lead person who is charge of the ventilator at the head and there are six members of the team to help prone the body.” 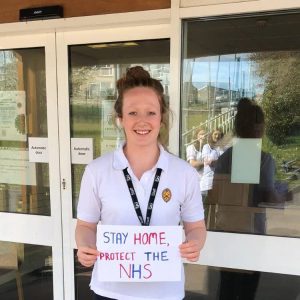 Fleming, who grew up in Devon but moved to Cardiff for university and qualifies to play for Wales via her grandfather, usually works as a community physiotherapist. She relishes balancing working with her usual patients wearing PPE while visiting their homes and coming into the hospital for her specialist shifts.

“As physiotherapists we have all volunteered and pitched in to work in the hospital,” she says. “We help each other through, sometimes it can be as simple as meeting some nurses outside you don’t know as well and having a laugh and getting to know each other.”

As the pandemic continues, Fleming will work with patients as they rehabilitate from the illness, helping them to breath alone again. She does not flinch at the task ahead. “I am so proud to be part of the NHS now, in the same way I was proud to line up for Wales, I am just doing my job.”

When the number of coronavirus cases began to creep up in Britain last month, 10,148 miles away in Adelaide, Layla Guscoth’s gut feeling was to return home and resume her second career as a doctor on the NHS front line. The 26-time England netball international caught one of the first flights out of the country shortly after Australia’s Super Suncorp Netball league, where she plays for Adelaide Thunderbirds, was postponed due to the pandemic.

“It felt like it was a waste of a skill set not to be here helping,” Guscoth says. “Thousands of doctors and nurses had been called out of retirement – it was a kind of all hands on deck thing – and I wanted to be a part of it all with my colleagues to help in whatever small ways I could.” 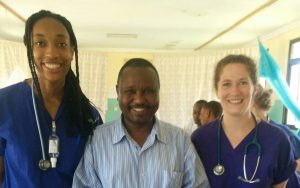 As a doctor whose career has largely involved working in hospital medicine, wearing personal protective equipment when attending to Covid-19 patients during 13-hour shift rotations at Birmingham’s Queen Elizabeth Hospital has made some elements of the job acutely alien.

“We dress up, we gown, we go to see people and then take it all off,” says Guscoth, who hopes to one day specialise in anaesthetics. “It’s all very strange and surreal. I’ve never had to do it before, even when we had influenza patients, it’s not quite the level of PPE that we’re wearing at the moment.”

This time last year Guscoth was busy preparing for England’s home World Cup in Liverpool, where she tore an Achilles tendon in the hosts’ second match and returned to court only to sing the national anthem in subsequent games. Answering her country’s call to arms during the healthcare crisis has put her own sporting goals into perspective. 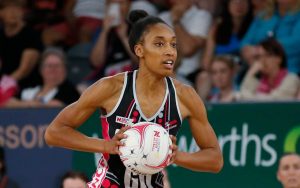 “One of the things this [the pandemic] has definitely taught me is you can’t plan too much,” says Guscoth, who is determined to view her time on the medical wards as an extended pre-season for her ongoing rehabilitation. “I’m sure it’s all taught us that. For months I’ve focused so much on an end date with my Achilles, which is around now.

“That’s all been thrown up into the air, but it’s nothing compared to what the rest of the world is going through. One thing it’s taught me is that we need to enjoy the processes of things a bit more rather than focusing on these magical dates.”

It is with a rueful laugh that Karen Findlay reveals that she is in the penultimate of her 30 years of service with the Metropolitan Police.

“I could retire in August – this is my 29th year of service. It is really funny isn’t it? You test and exercise for everything or you train for everything but nobody would have ever predicted this,” she says of the coronavirus pandemic.

Findlay, a former Scotland international, is joint head coach of Harlequins Women but known to many outside rugby circles for her starring role last year in BBC fly-on-the-wall documentary The Met: Policing London. 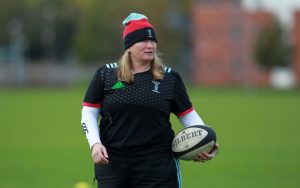 In her capacity in charge of a specialised uniform command, Findlay takes responsibility for policing demonstrations, protests and public gatherings, and is often seen on the frontline, controlling crowds on the streets of London.

As well as ensuring violent crime is fought; Findlay speaks with compassion of the task of helping to keep Londoners calm. “Another big focus is to get out there and really engage with the public and assure them at a time of public anxiety and [when] the public are scared,” she says.

“There is a real genuine level of angst towards the unknown. We are doing what we have always done – we are getting out there and talking to people. We are trying to encourage and advise them about what they can do to keep safe.

“I think the saddest thing is just thinking about how everybody will probably lose somebody they know through this tragedy. Your thoughts go out to everybody.” 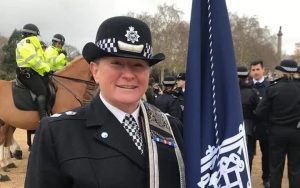 Findlay is proud of the role she and her colleagues in the Met are playing and pays special tribute to the mounted unit under her command for their ability to cover large areas of London and their role in keeping a city in lockdown safe.

She also oversees on-the-ground or “territorial” police officers as well as marine policing on the Thames and police dogs. However, she is keen to point out that this is an effort beyond the police, other emergency services and NHS.

“Everybody is doing everything, people are sewing scrubs for the NHS from their homes, it is amazing how the supermarkets are staying open,” she says. “It has been hard for everybody to keep the country running, it is hard, it is very hard.