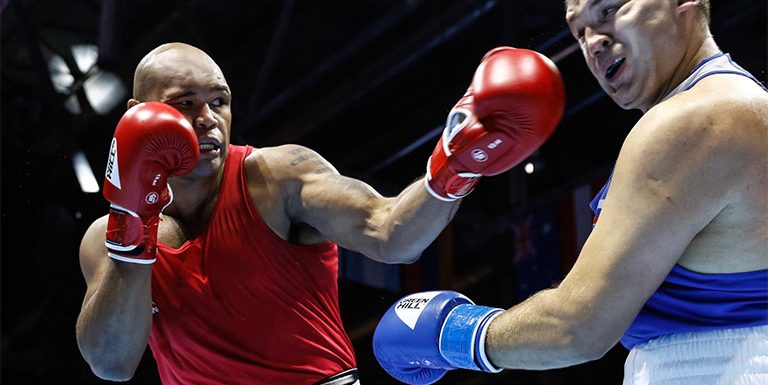 Patience and resilience are virtues that super-heavyweight boxer Frazer Clarke has mastered in the past decade as a member of the GB Boxing squad.

He had to watch as understudy and sparring partner as Anthony Joshua and then Joe Joyce claimed gold and silver respectively at the Olympic Games in 2012 and 2016.

The resilience came when he had to recover from being stabbed in the neck and leg four years ago in a random attack two weeks after becoming a father.

The 28-year-old goes into the Tokyo Games qualifying tournament in London on Saturday determined that this is his time to claim golden treasure from a journey to the east this summer.

The 6ft 6in boxer found the sport as an 11-year-old, after failing at every other pursuit. “I didn’t have an athletic bone in my body, to be honest,” he said. “I’d always been big so I tried rugby. I then tried boxing one day. It stuck. Before I knew it, it was three, four times a week. Sixteen years later, I’m still here doing it.”

Clarke’s parents were unsure about their son’s new-found preoccupation.

“They were a bit sceptical. All through my school years, they’d drilled into me that I needed to learn a trade, so I started an apprenticeship – machining and welding.”

But boxing was the bug that bit Clarke hard. “I was there in the squad before Joyce and Joshua.”

Clarke was never daunted, however, as the other two boxers were picked ahead of him to represent GB at the major tournaments.

“You see another heavyweight coming into the squad and you’re a bit wary. I’d already fought Joshua in 2009, so I knew him. When he came on the squad I knew he was going to be a hard load to shift. He was very strong and huge. Looking at the fighters who were at 2012, I don’t think I would have done anything.”

The night Clarke fought Joshua, in 2009, in his hometown in the amateur ranks, is a fascinating tale. “He’d had about five fights at the time. I can remember standing on the scales, I’m a little chubby kid and this shadow came behind me,” recalled Clarke. “He was like a man chiselled out of stone. He was like a wrestler, massive. Muscles coming out of his eyebrows. He gave me the deadliest look ever. I thought, ‘Here we go, it’s going to be one of them nights.’

“I got in the ring and I can remember the crowd going mental. They’d never seen me box at home. When Joshua walked out you could hear a pin drop. Anyway, we had a good fight. A right fight. He won on the old points system. I knew from then on he was going to be a good fighter.”

They got on famously afterwards, on the GB squad. “There is that rivalry, but you build a respect for each other. We were pals. A lot of fighters in other countries struggle to get sparring. I did hundreds of rounds with Joshua and Joyce.”

The Olympic Games now means so much to Clarke, with the Commonwealth Games gold medal in 2018 already in his locker. “It would be the final stamp,” he said. 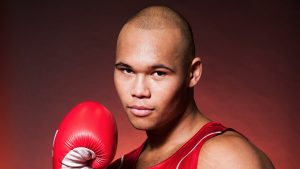 We touch on a major incident in his life, in 2016, just after he had become a father. “My daughter was two weeks old. We had the traditional go-out-and-wet-the-baby’s- head. We went to a nightclub. A local place I’d been in a hundred times before without any trouble.” But a fight broke out.

“In the heat of the moment I was caught in a fight with three or four lads. Outside, after it, my sister’s friend saw me and screamed. I can remember looking in a mirror and seeing blood coming out of my neck. I’d been stabbed. Then I realised I’d been stabbed twice in a leg as well. I’ve lost people close to me to stabbing. I was one of the lucky ones.”

Once Clarke had recovered from the wounds, he returned to boxing, even more determined.

On being chosen as one of Telegraph Sport’s “Eight To Watch” for the Tokyo Games, the big fella is delighted. “It’s nice, I appreciate it. No pressure on me at all. Hopefully. I’m the man to do the job. I want to carry on the tradition of the super-heavyweights in England. Audley Harrison, David Price, Anthony Joshua, Joe Joyce – all Olympic medallists. I want to be on that list. Hopefully I can do everyone proud.”