The decision to throw in the towel was taken by Mark Breland, who acted against the wishes of his fighter and his co-trainer

Deontay Wilder insisted he could have fought on against Tyson Fury after it emerged that one of his head trainer also disagreed with the decision to throw in the towel.

The dethroned World Boxing Council Champion was removed from the fight in the seventh round after taking severe punishment from his British opponent, with co-trainer Mark Breland acting alone in taking the decision to call a halt to the bout.

Wilder, who had been knocked down twice in the first defeat of his 44-fight career, said: “I had a lot of things going on heading into this fight. It is what it is, but I make no excuses tonight. I just wish my corner would have let me go out on my shield. I’m a warrior.

“He [Fury] had a great performance and we will be back stronger. Even the greatest have lost and came back, that is just part of it.”

Wilder’s head trainer Jay Deas revealed that he had stopped Breland from throwing in the towel earlier in the Las Vegas bout and was disappointed when the former welterweight world champion went ahead and did it anyway.

“Between rounds Mark said something about throwing the towel in and I told him, ‘Don’t do that’. I didn’t think he should do that.

“Then the fight went on a little longer and then I saw the towel go in. We’ll talk about it and figure out what exactly happened there. ‘I didn’t think he should have [taken the decision]. Deontay’s the kind of guy who goes out on his shield and he will tell you straight up – don’t throw the towel in.” 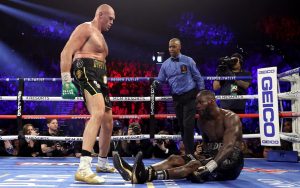 Fury, meanwhile, said he was “almost sure” Wilder would trigger their rematch clause and fight him for a third time, with the heavyweights having drawn their first bout 14 months ago. Wilder’s team have 30 days to exercise the option for the fight, which would split the purse 60-40 in Fury’s favour. The money from yesterday’s bout was divided equally.

“The spoils of war are fresh,” Fury said. “I need to enjoy this victory and Deontay needs time to recover. But I’m almost sure he’ll take the rematch because he’s a dynamite puncher and he can take someone out at any time. “With that level of danger, you can always win a fight. I’m sure we’ll do it again if he wants to. If he doesn’t want to, I’m happy with whatever my promoters say. Whoever’s next gets the same treatment, that’s for sure.”