In her 10th professional contest, Terri Harper dethroned Eva Wahlstrom, of Finland, now she has her sights on the top

Terri Harper flew straight to Gran Canaria with fiancee Jenna Hayden after claiming the World Boxing Council super featherweight title in Sheffield, the two women celebrating their partnership in love and sport. But Doncaster supermarket store manager Hayden, a former scholarship footballer, will be calling Harper in to stack shelves part-time – once the bruises have faded.

“We booked this getaway quite close to the fight so I flew out with all my black eyes,” explained Harper, 23. “I’ve had a good week. I’ve been relaxing, but training too. I’ve had strict orders not to put much weight on.

“I believe I’ll be fighting in April, May time. That’s my problem, as soon as I stop, the weight goes straight back on, but I’m staying on it and staying professional.”

On the undercard of men’s former world champion Kell Brook’s comeback, in just her 10th professional contest, Harper alternated aggressive attacks and smart defence to dethrone Eva Wahlstrom, of Finland, one of the sport’s most accomplished veterans. Harper’s assessment? “I’ve just beat a world champion. She had six good defences, so I’m happy. Every performance I feel I could have done things better. It’s all experience. Rome was not built in a day and I know there’s a lot more I can do.” 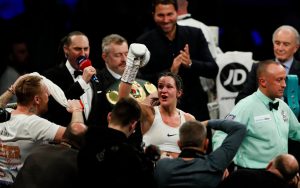 Harper might never have claimed the crown were it not for former boxer Andrew “Stefy” Bulcroft. “I boxed amateur, then I took a break for four years, but I knew there was always something missing. I came back and I had two senior fights. Soon as I got a second chance, I walked back in the gym and knew it’s where I belonged. I didn’t want to be like everyone else. Soon as Andrew turned me over I’ve been 110 per cent dedicated to the sport.”

But there was no glamour at the start. “I worked in a chip shop for four years. Then I went into doing support work, children with autism and learning difficulties. Then we took the risk to open our own gym, and with my pro fights and personal training, we made ends meet. It was a bit of a gamble to jump in feet first but it’s obviously paying off. But never in a million years did I think I’d be in this position. I’m thankful to Matchroom and Eddie Hearn for putting us women on these big shows.”

Women’s sport must be a welcoming place for the LGBT community
Partner Hayden knows about the commitment needed to succeed. “Jenna went to America to do football. She’d just turned 18 and went over to a scholarship,” explained Harper. “But she’s a real family person and got homesick straight away. She ended up coming home after a month. That’s when she got into normal work and gave up her dream as a footballer.”

“She always tells me if I’m having a bad day that she wishes she had a second chance at football. Not to take anything for granted. She’s great at that advice.”

They are from the same village and there has never been too much fuss about their relationship. “To be honest, I’ve been quite lucky. Growing up as well, I’ve never really been faced with any negative comments. There are a few things I see on social media. Someone talking about Jenna’s looks or how it’s nice to see lesbians have a place to go in boxing – stupid stuff. But that’s the world right now, it’s a lot more opinionated. But in the fight world, I’d say it’s more understanding than not. Everyone has been happy to accept us.”

Women’s Sport newsletter in-article
“We’ve been together just over three years. It’ll be four years in November. I always post stuff on my social media of us. A lot of people say we’re a lovely couple. I think a lot of people can see how supportive she is of me.”

Women’s boxing is certainly growing fast, to Harper’s delight. “It’s booming. There’s a lot of girls turning over to the pro ranks and it’s great to see. I’ll do it for as long as possible. I love it. I live and breathe boxing. Jenna is telling me to chill out, but I need to be doing something. I love the gym, dieting – everything. As long as I can be in this sport, I’ll be in it.”

And a fight up a weight division with Katie Taylor, the unified lightweight champion? “To me Katie is the Queen. In my opinion she’s the best out there. A few more learning fights for me first, build myself up and then I will probably want to fight the best out there, and that’s Katie.”