Kell Brook is willing to fight Liam Smith next, as long as it is “on the road to becoming a world champion again”, after a statement stoppage and dominant performance against Mark DeLuca in Sheffield.

Having shed the 4st he gained from 14 months out of the ring, Brook came back with a bang after stopping the Italian-American, a former US Marine known as “Bazooka” DeLuca, to get back on a coveted world title comeback trail this year.

Brook, the 33-year-old former International Boxing Federation welterweight champion, revealed in The Telegraph last week that he had battled bouts of deep depression and mental health issues for two years, ballooning to 15st. But he insisted after halting DeLuca in the seventh round with a brutal left hand – having felled him in the third round – that his appetite for the toughest challenges had returned.

He said the fight with Smith, the British former world champion “is a good fight, and I’m sure my promoter Eddie Hearn will have a look at the numbers and see if it works, and come up with a plan”. He added: “If Smith is on the road to me becoming a world champion again, then fine. But all the people who think I am over the hill, or washed up, or I don’t want it any more are now my motivation.”

Brook had pledged he would retire if he could not defeat the underdog southpaw from Boston, but the Briton dominated the bout, in spite of DeLuca fighting back gamely.

“The Bazooka was durable so I had to chip away to get the sensational finish,” Brook said. “It was a clinical finish, he was tough, and he had never been stopped. Once I settled down, it was a bloodbath in there. I’m going to get better and better. You never stop learning in this game.”

Smith, 31, the former World Boxing Organisation light-middleweight champ, was ringside at Sheffield’s FlyDSA Arena to witness Brook’s winning return, and said: “I would love a fight with Kell. I’d maybe like another fight first in April, but if not, I’ll be ready for him in June.” 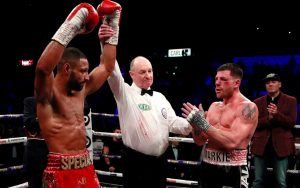 That may line up for the two former world champions to meet on the undercard of Anthony Joshua’s heavyweight world title defence against Kubrat Pulev with the new Tottenham Hotspur Stadium as the front-runner to house the event.

Elsewhere on the card, Kid Galahad, above right, again earned his place as a mandatory challenger for the IBF featherweight crown held by fellow Yorkshireman Josh Warrington with a battling performance against Claudio Marrero. He stopped the fighter from the Dominican Republic, who failed to show for the start of the eighth round after having his nose bloodied.

Galahad suffered the only defeat of his 28-fight career against Warrington but is now set for a rematch, most likely this summer, after Warrington has unified with the WBO title-holder.

In the women’s title fight of the night, Terri Harper, 23, from Doncaster, claimed the World Boxing Council super-featherweight title on points from long-reigning veteran Eva Wahlstrom, of Finland.