Unbeaten heavyweight reveals his battle to manage his mental demons

Tyson Fury is preparing for the biggest fight of his life, a rematch with Deontay Wilder in a fortnight that should put one of the fighters a significant step closer to becoming the undisputed heavyweight champion of the world. For Fury, however, the challenge has been not only to retain focus during his spartan training camp on the outskirts of Las Vegas, but also to manage his mental health.

For this is a fighter who, shortly after the crowning victory of his career against Wladimir Klitschko, sank into such a depression he says he took to the wheel of his Ferrari with the aim of ending his life.

“One day I woke up and thought, ‘Today’s the day I end it all,’” he explains in a three-part ITV documentary series beginning on Thursday night. “I was heading towards this bridge, I was going to smash the car into the bridge, I just didn’t have the ambition to live anymore.”

Fury, having been diagnosed with bipolar disorder and obsessive compulsive disorder, had suffered his breakdown after stunning the boxing world with his defeat of Klitschko in 2015. The achievement earned him three of the four major belts, but the comedown from the feat struck hard.

“I always knew I was unwell, but I put it to the back of my mind because I had a job to do,” he says. “My job was to become heavyweight champion of the world so you put all your eggs in one basket and [if] you’ve an addictive personality, it’s all or nothing in everything you do. And [then] you’ve achieved your dream and there’s no further you can go; that was Everest and that’s it. It all came crashing down.”

After failing a drug test, Fury voluntarily gave up his belts. After hitting a new low. “I woke up wanting to die on a daily basis, I didn’t want to live anymore because I was het up by depression so that’s as low as you can go,” he says. “You’re looking at the man who has everything, acclaim, glory, fame, a family and everything that goes with it, the trimmings, the gravy and still he isn’t happy. We’re made to believe success is happiness, but that’s very untrue.”

His wife Paris, with whom he has had five children, talks candidly about that period in the documentary. “I remember when he went off in the Ferrari and before he left he said, ‘I ain’t coming back’ and, as the day progressed, his phone was off so I called his dad and asked had he heard from him because I don’t know where he’s at and I’m worried,” she says.

To the family’s eternal relief, he did not go through with the suicide attempt. “Before I got to the bridge, I heard a voice saying, ‘Don’t do this, you’re going to destroy your family’s life,’ and I immediately pulled the car over and that was the first time that I thought, ‘Right, now or never. I need to get well immediately.’”

He recovered well enough to hold Wilder to a thrilling draw 14 months ago, with Fury getting up from being seemingly knocked out in the 12th round, a recovery that is one of the most dramatic moments in the sport.

“I see this being a shorter fight. I see myself putting a lot more pressure on him and landing a lot harder shots. I got greedy in that first fight. I’m going to stop him this time.” 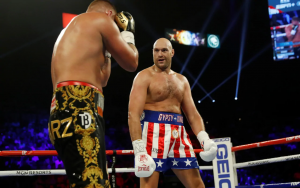 Fury now uses boxing and staying fit as “medicine” to help with his emotional struggles. “I haven’t defeated mental health, I still have bad days and good days, everybody does but it never goes away. But I learn to maintain and that’s it. Thinking positive and being around positive people,” he says.

More than anything else, Paris keeps him grounded. Like Fury, she is from a traveller background, and is careful not to “get involved with the fame side of things, the celebrity lifestyle… we’re trying our hardest to keep normality. You might not live in a trailer but it doesn’t take away what you are. You’re a traveller, we’re proud of that heritage.”

“We know each other like salt and pepper. We go together like butter and toast. A match made in heaven. We were meant to be. Some people never find their soulmates.