“Camp has been amazing,” explains Julia Budd, brimming with life and enthusiasm. Why shouldn’t the Bellator featherweight champion be that way. In her path, arms folded and a serious obstacle, is Cris Cyborg Justino, her opponent on Saturday night at the fabulous Forum here in the city of angels.

Cyborg just happens to be, in fighting terms, the type of fighter who has been likened so many times to Mike Tyson in boxing, a wrecking ball machine from Brazil who has reached the pantheon of greats in mixed martial arts, and has made her name in the UFC with Invicta, Strikeforce, the UFC and now Bellator.

Cyborg is aiming to become the first woman to win world title belts in all four organisations. Some feat.

But the Canadian Budd is at the peak of her powers. “We know her strengths and weaknesses. There’s no excuses for me not to go out there and have the best performance of my career. I can say that with absolute honesty,” Budd told The Daily Telegraph in an exclusive interview. “I am so ready for this. I’m so grateful to Bellator. I feel it’s a way I can introduce myself to a lot of the world who hasn’t tuned in before. I’m grateful for the opportunity but I also know how good I am and what I bring to the table. It’s kind of this perfect blend of me believing in myself and going out there and being able to show the world who I am.” 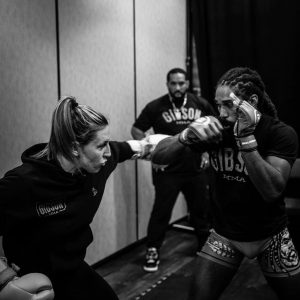 What goes through a fighter’s mind when they are asked about, confronted by an opponent who is called ‘GOAT’, who they know will come looking to rip the head off you… ? Budd, the champion for two years, has a definitive mindset.

“I’m just looking at a woman with two arms and two legs. That’s who I’m fighting. I’m preparing for the best Cris Cyborg. Other people can decide the greatest of all time. I’m going in there to face a human being who is just another mixed martial arts contender standing across from me. This is my opportunity to show my very best. I think people sometimes get caught up in the vibe around her and they work themselves up and break themselves down. My preparation has really helped me chip away at all that.”

The key to victory over Cyborg, is laid out simply. “Using all my skills and my weapons. Using my striking but putting the pressure on her. I just feel like I’ve got to put all my skills together and not be one dimensional. I feel the last ten years have been preparing me for this, for an opponent like her. I’ve faced a lot of forward fighters and girls with heavy hands. I feel I match up great with her.” 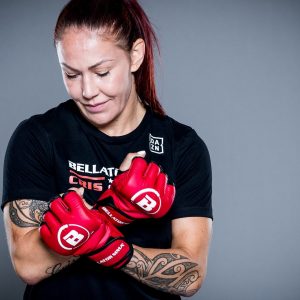 But this is big. Very big for Budd. “I believe this is a legacy fight and they don’t come round very often. I n the very beginning I feel I got thrown into the deep end. My whole first year in Strikeforce was crazy and I was fighting the toughest girls out there. That was a rollercoaster year, but I feel they prepared me for this fight. Finally I’m in a fight like this and I believe 100 per cent in myself. I’m so excited and it doesn’t feel like just any other fight. The training, the motivation- everything is different. I’d be lying if I said it feels like another fight. This is very serious. All my eggs are in this basket and I’ve trained so hard for this fight.”

The timing – as Budd sees it – is perfect. “I think that now is the absolute perfect time. It wasn’t that I wouldn’t have been ready, but two or three years ago I had back injuries and I was fighting through a lot. I was questioning where I could continue in this sport before I had this resurgence and really came into my own. I feel I’m at the absolute best. This is the time for me. She is the No.1 contender for sure. With her history and all she’s done, this is the fight. I’m so proud to be headlining with her in Los Angeles.”

If Budd’s plan works, there will be no need for a rematch, a second contest. “I plan on going in there and dominating. I can’t think like that, that I might get another chance at it. This is everything for me and my eyes are fully on this. I’ve poured everything into this fight. Maybe, but I’m ready for this fight.”

“I want it to be so convincing that there’s no question left in anybody’s mind. We’ve been sparring six, seven minute rounds. We’ve been breaking down all the parts of my game we haven’t before. I want to have the best performance of my career.”

There is little doubt that Budd is in the group of women making history at present. Women’s fighting in another decade, as we begin the new one, will evolve massively. We know that from the current curve.

“I see it taking off again. It’s been so quick to create the vibe right now. And fighters are getting better and better. I feel like it was like the four minute mile back in the day. People thought that could never be done and here we are. I feel it’s the same thing with women’s fighting and MMA in general,” explained the lucid British Columbian. 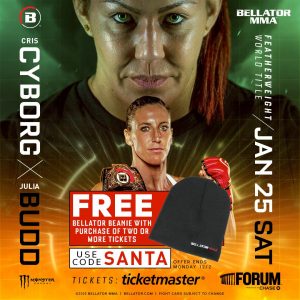 “The fighters in there now have been doing it their whole lives and you see these incredible performances. Our martial arts classes is probably 70 per cent girls and women. They’re competing and grappling and you’re seeing six year olds pull off these insane submissions. It’ll be second nature to people. The fact I even have a piece of the history, I can’t wait to see how it grows. I think it’ll be even bigger than we think.”

“There were such mismatches before. Now we’re seeing these fully involved mixed martial artists. My goal my entire career has been to fight the best in the world and be the best in the world. I’ve learned from my losses and grown. That’s my only focus. I’m not interested in boxing or pro wrestling. While I’m in this sport, I want to break new barriers. I’m fully in mixed martial arts. This is it for me. Being a world champion has been my dream all along, but the fact I got it and held it, I’m fiercely protective of it. That is something I plan of showing on January 25th.”

We are set for the women’s battle of Los Angeles. No quarter given. None expected. Legacy fight for Budd. Return to the history books for Cyborg.