Tyson Fury and Deontay Wilder both claimed yesterday that there will be a decisive knockout finish in their heralded rematch as the two heavyweights resumed their war of words face to face at a press conference in Los Angeles ahead of their February 22 fight in Las Vegas. The monumental match-up has brought about an historic dual broadcast with FOX Sports and ESPN aligning coverage from the MGM Grand Garden Arena in Sin City.

Coming fourteen months after their first, controversial encounter, in which Wilder retained the WBC title through a split draw on the judges’ cards, both fighters delivered strong messages yesterday.

“This is the biggest title fight of this era for sure and I can’t wait,” said undefeated World Boxing Council heavyweight champion Wilder.

“We all know in rematches I’m always sharp because I’ve been in there before and I know what my opponent is capable of doing and what they plan on doing. I’m prepared more than ever for this fight.”

“I knocked him out the first time we fought. I told him two years ago I was going to baptize him. Rising up is part of the baptism. But this a different story. This is unfinished business. Because he’s in the WWE now, I’m going to make sure he gets knocked out of the ring. I might even come down with a flying elbow from the top rope.”

Fury was equally bold. The British fighter, ranked No 1 in the world by Ring Magazine in spite of not holding a belt, said: “The consensus is either he knocks me out, or I win on points. Usually when people have that opinion, it goes the opposite way around. Expect him to box and me to be looking for the knockout. He thinks I’m going to come out herky-jerky with my famous style, but I want him to meet me in the center of the ring and have a slugfest, best man wins.” 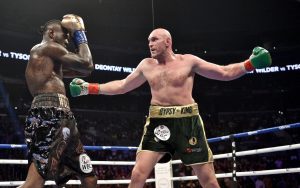 “I didn’t have the gas to finish him in the last fight, but this time I can turn that screwdriver until he’s gone. Let’s make it a Marvin Hagler vs. Tommy Hearns type of fight. I’ll meet you Inthe middle of the ring on February 22. Just watch out for the right hand, because you’re going to sleep in two rounds.

“We finally have the rematch and I can’t remember a bigger heavyweight fight in a long time. Maybe Lennox Lewis vs. Mike Tyson was the last big one like this and that was another U.S. vs. U.K. showdown.

“What’s going to happen in this fight is that I’m going to get what I rightfully won last time. I’m going to get the green belt and keep my lineal title. And if he wants to rematch me after, I’ll beat him again. I’ve already beat him once, and I know I can beat him three times in a row.”

Wilder was in no mood for Fury’s thoughts, offering his theory on the intervening fourteen months since their first fistic meeting. “Fury not wanting the rematch me immediately definitely made this fight bigger. We had two warm-ups. I had a lot more dangerous road than he had though. He played it safe, while I went to the mountain top and climbed it. I’m building for my legacy,” explained the Alabaman.

Wilder commented on Fury’s split with trainer Ben Davison. “If he beat me, then why all the new trainers? Every day it changes. Firing and hiring. He wants to talk about being out of shape the first time, but he was in great shape. He spent 100,000 pounds on all those camps. I still to this day have the same people with me and I don’t need to change it.”

“When you’re facing power there’s no way around it. You can’t prepare for that. You just have to hope that when it lands, it doesn’t do that much damage. He doesn’t even know how he got on the ground or how he got up in the first fight. He’s been dealing with feeling that, ever since the end of the first fight.”

“I’m going to do exactly what I said I would do. I’m going to knock him out. I’m the lion. I’m the king of the jungle. I’m going to rip his head off his body. Everyone sit tight and buckle up. He believes in his heart that he’ll knock me out. I always teach people to speak it, believe it and receive it. The magic of it all is in the belief. Though he’s saying those things, I don’t feel in his energy that he believes that. I feel like he’s nervous because of what happened the first time.”

Wilder, who produced two of the knockouts of the year in 2019 against Dominic Brezeale and Luis Ortiz, explained coldly: “I just learned from the first fight that I need to be calmer. I’m going to be a lot more patient in this fight, just like in the second Ortiz fight. The object of boxing is to win, not just to win rounds. And I win in devastating fashion.”

Fury, equally confident, looked back on the first fight, and added: “I’m going to win, that’s what I do. Deontay Wilder can make all the excuses he wants to make. Everyone on his team can tell him he won that fight, but as a fighting man, you know when you win and lose a fight. I’m going to go out there give him a boxing lesson and knock him out.”

“He’s going to try to and the right hand. If I’m stupid enough to get hit with it, I deserve to lose. I hit the floor twice in the first fight, but it’s all about how you respond, I’m a fighting man. If he can’t finish me, I’m going to eat him up.”