The beauty of women’s fighting. We saw it exemplified to a tee in Hawaii, where Bellator flyweights Alejandra Lara and Veta Arteaga, of Colombia and Mexico respectively, stole the show with a toe to toe battle in salute to the troops. It screamed for a tournament in this weight category, which brings a blend of power from those at the weight. Last night was beauty and brutality.

The original main event, between Josh Barnett and Ronny Markes at heavyweight, was cancelled at the eleventh hour after Barnett was taken ill in his dressing room. Barnett was taken to hospital from the arena. Markes, understandably disappointed, called on Bellator to reschedule the contest for its January 25 show in Los Angeles, or February 22 event in Dublin, Ireland.

Markes had found out with two fights to go until his walk-in, as the Brazilian warmed up in his dressing room, that the contest had had to be binned, after Barnett had been vomiting in his warm-up room, though he had been unwell all day.

It meant that the women – Lara and Arteaga – drew the night’s plaudits for a thrilling three-round war, with Lara, once a gymnast and trapeze artist, having adapted her style over the last year to planting her feet and throwing hard from the southpaw stance. Lara came close to knocking out Arteaga with left leg head kicks, but was willing to stand toe to toe with the hard-hitting Mexican.

The fight came perhaps as a precursor to the main event tonight, with Bellator flyweight champion Ilima-Lei Macfarlane defending her title against Cornwall, England’s Kate Jackson here tonight in back to back events.

Jackson is the first British woman in history to fight for a world title in mixed martial arts. 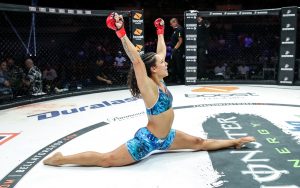 There has been talk all week, moreover, about Bellator’s new tournament for next year, with three having taken place in the last two years: at heavyweight (winner Ryan Bader), welterweight (winner Douglas Lima), and featherweight (ongoing, current champion Patricio Pitbull Friere). Some of the focus has been on the Bellator women’s flyweight roster which is replete with talent, with Liz Carmouche, famously having almost brought to an end Ronda Rousey’s rise to the top, signed yesterday by the fight league.

Scott Coker, president of Bellator, told The Daily Telegraph yesterday: “I think our 125lbs weight class is a possibility for a female tournament. I think we’ve got a lot of young potential stars there. A tournament draws our stars. It’s not determined yet, though. I’m not committing in my mind. There’s a couple divisions in my mind that could be made into a tournament.”

The eight flyweights, however, who could make up a tournament right now provide a mouth-watering prospect: 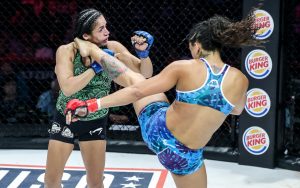 The event was Bellator MMA in union with the USO, with the fight night attended by servicemen and women on active duty in these Pacific islands.

Joey Davis continued his rise up the welterweight ladder, Toby Misech pulled off a dramatic first round KO, and Cass Bell continued his undefeated run since joining the Bellator roster.