Deontay Wilder ensured a rematch with Tyson Fury when he knocked out Luis Ortiz in the seventh round of their rematch in Las Vegas.

Wilder showed that he remains arguably the most devastating single-punch heavyweight of all time after being second best for the first six rounds. His 10 consecutive defences of the World Boxing Council heavyweight title drew him level with Muhammad Ali, with only Wladimir Klitschko (18), Larry Holmes (20) and Joe Louis (25) having amassed more.

Wilder insisted afterwards at the MGM Grand Garden Arena that his goal remained to unify the heavyweight division and become undisputed champion. “Next, we have Tyson Fury in the rematch,” Wilder said.

In a rematch of their epic 2018 fight, in which Wilder rallied after almost being stopped by Ortiz in the seventh round, the Alabaman looked to have lost all six rounds until he found a right-hand straightener to knock out the Cuban and end the contest.

Until then, Wilder was unable to find the range or opening against the awkward, skilled southpaw.

“With Ortiz, you can see why no other heavyweight wants to fight him,” Wilder said. “He’s very crafty, he moves strategically and his intellect is very high. I had to measure him in certain places.”

With the seventh round counting down, Wilder used a feint and a straight-right cross to put Ortiz down, the first time he had been hurt in the fight.

“I had to go in and out and finally I found my measurement,” Wilder said. “I saw the shot and I took it.

“My intellect is very high in the ring and no one gives me credit for me. I think I buzzed him with a left hook earlier in the round and I took it from there.”

With Ortiz unable to get to his feet, referee Kenny Bayless waved off the bout at 2min 51sec. Ortiz was leading on all three scorecards, by margins of 58-56 and 59-55 twice.

According to the CompuBox scoring system, Ortiz outlanded Wilder 35 punches to 34, with a 28 to 17 advantage in power punches.

Meanwhile in Liverpool, Callum Smith clung on to his super-middleweight title in a thriller against John Ryder. 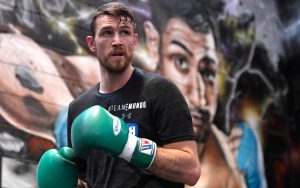 In a close fight, the three adjudicators saw Smith the victor by 117-111, and 116-112 twice, which angered fans and seasoned observers. The Daily Telegraph scored the World Boxing Association world title bout to Ryder by one point, his tenacity impressive as the underdog from London fought magnificently on the inside, taking his opportunities time and again from behind a high guard.

Smith admitted afterwards that his had been an off performance. “It was a tough fight,” he said. “He stopped me from doing what I’m good at doing.

“It wasn’t my best performance. He made it hard for me. You never know, that performance may tempt some of my opponents to come and fight me.”

Ryder rightly felt hard done by. “I feel that’s harsh. I give my life and soul to boxing, but I will come again,” he said.

Liverpudlian Smith, 29, extended his unbeaten record to 27-0, and hopes to get his dream fight at Anfield against Saul Canelo Alvarez, but it would be a rematch with Ryder next which would be fitting.