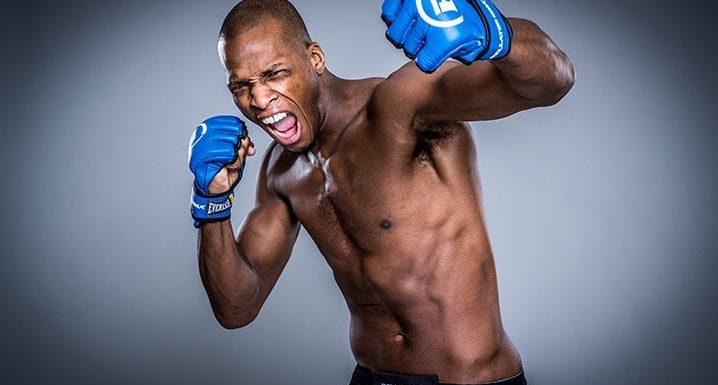 Michael Venom Page did what Michael Venom Page does – this time to Giovanni Melillo – on a raucous night in London as Bellator closed its doors on 2019, but it looks as if the former freestyle kick boxer may have to battle for his desire to face his nemesis Douglas Lima, the Bellator welterweight king, in his next contest.

It took a right hand delivered like a cannon at the edge of the Italian’s chin to send him backwards like a brick, his arms flying upwards as a new victim hit the ground, and the knockout artist enjoyed his latest arm-raised festive celebration. Black Friday is upon us, but this was a black Saturday for Melillo.

There will be no thanks given by the rivals, though, as Paul Daley – working with broadcaster Channel 5 – Lorenz Larkin, and even recently-defeated Rory MacDonald, all vie for the next championship contract.

Lima was impressed with Page’s performance – in fairness nothing but a knockout would have been seen as enough – but the Brazilian was clear that he would like to see ‘MVP’ “beat some ranked opponents” before he accepts a rematch. Fair enough. But Larkin (who fights in Japan at the close of the year) and Daley are all in similar states.

It will be intriguing to see how that one plays out. Never know, given the current signing spree – Cat Zingano, Josh Barnett, Sergio Pettis, Cris Cyborg – the next title challenger may come from elsewhere.

The grudge fight between Mike Shipman and Fabian Edwards was played out in fight week in a set piece of simmering feuds and words, and ended with a controversially scored fight, though it was difficult to separate the two.

Shipman, the more experienced, muscular fighter, might have taken the first two rounds, while Edwards woke up in the third and did what he does brilliantly. Rightly, Edwards was disappointed with his performance. It took him ten minutes into the fight before he threw his first left leg kick.

Shipman may have thought he was ahead going into the third stanza, but he appeared fatigued, and indeed hurt, in that third period. Both men may have expended a lot of emotion in fight week, and it may well have taken something out of them. Personally, a second encounter in 18 months to two years time could be very interesting indeed.

We wanted to see what the exciting young striker could do against the powerful, more experienced grinder. We did not quite get there. But we will.

In the first fight on the main card, Terry Brazier ran into a Viking in Soren Bak who drown him with longships of wrestle, muscle and grind. Brazier, a former soldier with a fascinating back story who came into the Bellator league with a reputation as a teak tough, rounded champion, has had a hard time of it, and appeared to let his game plan escape him, failing to keep the fight long.

In the prelims, Dutchwoman Denise Kielholtz roared with delight after a brilliant 32-second submission of Sabre Sengul, Charlie Leary looked unlucky to have the decision go against him in a three-round fight with Tim Wilde, Robert Whiteford enacted a brilliant finish against Sam Sicilia from a brutal right uppercut in the closing seconds of their encounter, and Chris Bungard, with a first round submission of Benjamin Brander, made his case for being a main card fighter at the next UK event.

That is expected to be announced as in the first quarter of next year, with James Gallagher heading up the first event of the year in Europe, rescheduled from earlier this year, on February 22, at the 3Arena, Dublin.

With Linton Vassell having looked measured, dangerous and fast on his Bellator heavyweight debut against Sergei Kharitonov, in Tel Aviv, the last blast of the year with deep British interest is the Hawaii challenge for Kate Jackson, the underrated flyweight who has crept up the roster and challenges Ilima Lei Macfarlane in Honolulu at the Bellator two-night double header on December 20//21.

But overall, this has been a great year for the fight league on these shores, both televisually with broadcasts on Channel 5 and Sky Sports, and in the resonance of the burgeoning European series, which will grows exponentially next year to an expected ten events.