Katie Taylor and Saul ‘Canelo’ Alvarez, the two biggest global stars of women’s and men’s boxing, augmented their respective legacies on Saturday night when both boxers became multi-weight world champions within hours of each other in Manchester and then Las Vegas.

Both fighters continue to set extraordinary records. Taylor secured a unanimous points victory over Christina Linardatou to become a two-weight world champion, having moved up a weight division to super-lightweight for the first time, winning the WBO 140lbs title against the aggressive Greek fighter and taking the decision 96-94, 97-93, 97-93 on the judges’ cards.

Yet the defending champion was never broken by Taylor, who had to come through torrid periods in the contest, keeping herself ahead with nimble footwork and faster hand speed. Sensibly, gone is the version of Taylor who would once just indulge in toe to toe wars.

The newly crowned two-weight world champion is set to headline an all women’s boxing card in New York’s Madison Square Garden next March. Eddie Hearn, Taylor’s promoter, revealed that streaming service DAZN are planning the card on March 7, on the eve of International Women’s Day. 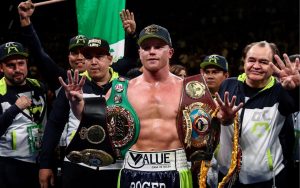 Taylor is also the undisputed world lightweight champion. Linardatou, meanwhile, accused Taylor of “being a fake”, claiming that the Irish boxer is afforded favouritism.

“I feel that I won that fight. I think they are protecting her. She shouldn’t win fights like that. If she respects herself, she will have to give a rematch to me and a rematch to [Delfine] Persoon and then she can say ‘I am undisputed, or I am a champion in two weights.'”

Also on the Manchester card, popular former world lightweight champion Anthony Crolla retired after a majority decision win over Frank Urquiaga, claiming victory in the 45th and last professional fight of his career. In his 14th appearance at the Manchester venue, the judges returned scores of 95-95, 98-92, 97-93 in a ten-round contest with the Spaniard.

Hours later at the MGM Grand in Las Vegas, Canelo Alvarez inflicted a brutal 11th round knockout on Sergey Kovalev to take his WBO light heavyweight world title and claim a world championship in a fourth weight division.

The Mexican star, who joined the professional ranks at the age of 15, and 14 years later has a resume of 56 fights and one defeat to Floyd Mayweather, has now won titles in weight divisions from 154lbs to 175lbs.

Canelo stalked his rival all night and, in a close contest, took his opportunity with alacrity as his 36-year-old opponent, seven years his elder, began to tire. Alvarez becomes only the fourth Mexican to win world titles in four divisions after Erik Morales, Juan Manuel Marquez and Jorge Arce.