Japanese New Year celebrations have long involved a mega-fight from PRIDE to K1 to Dynamite, and traditions fade slowly in the land of the rising sun.

For the first time in the Bellator MMA organization’s history, they will travel to Japan and the iconic Saitama Super Arena for an historic event, bringing one of the greatest heavyweights ever, Fedor Emelianenko (38-6, 1 NC), to face Quinton “Rampage” Jackson (38-13) in a showdown that was never witnessed in that country at the height of popular fight sport fame.

Yet both were, and still are, resonant figures in the fight industry there. Regardless of the years, and the toll on their records, and their bodies. Bellator Japan, Fedor vs. Rampage, promoted in partnership with RIZIN, will take place on Sunday, December 29. Bring on the fireworks.

The Telegraph understands there are also plans for the event to be aired on Sky Sports.

“For Bellator’s debut in Japan, we wanted to bring a massive event and fighters that the Japanese fans really connect with,” explained Bellator President Scott Coker yesterday, from Tokyo.

“Given the vast history of martial arts and MMA in Japan, and especially at Saitama Super Arena, this will be a very special show that no one will want to miss.

“This will, unquestionably, be a monumental event for Bellator and I am looking forward to the moment that Fedor and Rampage walk out to a crowd that has known them since their careers began.”

“I would also like to thank RIZIN for their help in making this event a possibility and we look forward to working together in the near future to showcase the best talent each organization has to offer.”

Fighting out of Stary Oskol, Belgorod Oblast, Russia, Emelianenko returns to Japan following a run which took him to the final of the Bellator Heavyweight World Grand Prix earlier this year, where he earned consecutive first-round knockouts over Chael Sonnen and Frank Mir. The final was won by Ryan Bader. 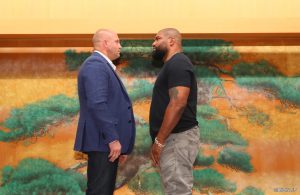 A former PRIDE FC Heavyweight Champion and PRIDE 2004 Heavyweight World Grand Prix Champion, the enigmatic Russian known as ‘The Last Emperor’ returns to the land where his career really did flourish and where he became one of the first great icons in the mixing of martial arts. That Sambo style has been adapted and adopted since into MMA.

The Russian’s resume is one of the most impressive in the history of the sport with victories over greats such Antônio Rodrigo Nogueira, Mirko Cro Cop, Mark Hunt, Mark Coleman and Andrei Arlovski.

With 29 career victories ending via finish, the punching power and world-class skills of the stoic Russian could result in yet another defining moment in his illustrious career.

An eight-fight veteran of Bellator, ‘Rampage’ Jackson’s own legendary career took him another route, and saw him compete against some of the top names in the sport, generating a loyal army of fans along the way.

Also a former PRIDE and UFC champion, the American Jackson is the proud owner of many epic highlight reel slams and knockouts that he has racked up throughout his epic battles with the likes of Chuck Liddell, Dan Henderson, “King Mo” Lawal, Kevin Randleman and, perhaps most-notably, his four-fight series with Wanderlei Silva.

The Memphis, Tennessee-native has long been seen as an icon to MMA fans around the globe and has openly voiced a desire to face Fedor in front of a Japanese crowd before his career comes to an end.

Now, the two legends will finally meet inside the Bellator cage on December 29 at the renowned Saitama Super Arena.

Elsewhere, Bellator opened its inaugural fight week in Milan, Italy, yesterday, as part of its ongoing, and growing, European series with Coker announcing that two new European destinations will be added to its series next year: Amsterdam, Netherlands and Stockholm, Sweden.

The event also features a series of MMA and kickboxing bouts, all at Allianz Cloud Arena.

In the main event of Bellator 230 – part 2 of the three chapters – former middleweight king Rafael Carvalho (16-3) takes on Vadim Nemkov (10-2). The Brazilian-Russain pairing square off at light heavyweight.

This will also be the first European card to be broadcast live on Channel 5 on Saturday night.