It was the most unusual of boxing press conferences, at The Troxy in east London, late last night. Full of sound and fury, the spectacle signified, again, that YouTubers and social media influencers – as many now accept – are the modern means of advertising and endorsing to the world. Or at least a new world.

This was the platform from which KSI and Logan Paul, two of the greatest stars of that sphere with 40 million subscribers, followers, or fans, traded heavy verbal blows as they came head to head at a fiery, intense face off on stage with all the chutzpah of a WWE theatrical mash up.

The YouTube stars, who first fought in the biggest white collar fight of all time (watched by 20 million last year, online of course) will fight again in Los Angeles on November 9. This time on a professional pay per view platform, live on Sky Sports Box Office this time, on DAZN in the USA, and promoted by Eddie Hearn.

On Monday night, a sold-out crowd – mainly teenagers – circled the Troxy hours out from the event. The hooting and wailing did not end – nor objects being thrown – until the two men had left the building.

“With no headguards, I have to be honest with you, someone is getting knocked out in LA on November 9,” said Hearn. It was all he, Adam Smith head of Sky Sports Boxing, or Joe Makovsky of DAZN, needed to say. Cue the two grudge bearers, who then just kicked off from where they were last year before and after their majority draw. KSI vowed to knock Logan Paul out ‘by round five’ and sent a chilling message to the American’s brother, telling me in an interview beforehand: “I’d like to break Jake Paul’s skull”. 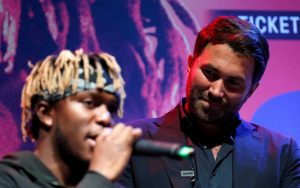 “November 9th I’m knocking him out by round five. There’s nothing he can do about it,” said the 26-year-old from Watford. “He can lift as many logs or trees or tyres as he wants. He’s getting finished. I don’t know what he’s going to be doing, I don’t care…I do not like Logan. I feel like that makes sense [a fight with Jake Paul]. I’d love to have that fight. I’d love to break his skull as well but we’ll see.”

KSI – real name Olajide William “JJ” Olatunji – hopes that some of his fans will embrace the sport, too. “There have been people saying ‘oh, this is a disgrace’ and there have been some people who have said ‘this is fantastic for the sport’.”

On the night, Paul, an American, and dressed like a Parisian cat burglar, played the foil. He predicted “a first-round decapitation” as the vitriol for him grew. When the protagonists faced off, KSI talked, while the man from Ohio simply stood and stared back. They will headline in LA with elite boxers Billy Joe Saunders and Devin Haney on the undercard. It is anathema to the purists, money and numbers to the coffers of the fighters, promoters and broadcasters. 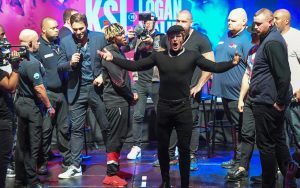 Take your pick. Choose your taste. Was it ever thus ?

A few hours later, on WWE Monday Night Raw, Tyson Fury, the former world No 1 heavyweight champion, stepped into the ring, took the microphone and addressed the millions of wrestling fans across the world about his encounter with WWE Superstar Braun Strowman – a former strongman who stands at 6ft 8” and weighs-in at 385 pounds.

Last Friday, Fury and Braun stared each other down before the ‘Gypsy King’ was escorted from the venue after jumping the barricade on the front row. “Tonight I’m here to demand an apology,” Fury told the WWE Superstar, having felt wronged by the 6ft 8in wrestler and being thrown out of the SmackDown arena when he jumped the barricade in an attempt to confront him. “I was just trying to have a little fun, when I saw Tyson at ringside,” Browman said. “If he wants to get serious about this, he can. He might get these hands.”

Not long after, the two giants got physical before the WWE locker room came to separate the two in a heated (and acted) twenty-man (fake) brawl. Nonetheless, it was a Monday night when the boxing world was turned on its head.