Daniel Dubois has declared himself “a man on a mission” as he ­challenges unbeaten Ebenezer Tetteh for the vacant Commonwealth heavyweight title at ­London’s Royal Albert Hall on Friday.

Dubois, thrilled at the prospect of adding the Commonwealth crown to his British title, plans on trading leather with the heavy-­hitting Ghanaian, who is unbeaten in 19 fights with 16 knockouts. “It’s my job to come through in style. I haven’t really studied Tetteh. I just want to fight and win again,” he explained.

Dubois, 22, is powerful with both hands and has a 12-0 record. Last week he was voted Young Boxer of the Year by the British Boxing Writers’ Club, the first heavyweight since Herbie Hide in 1993 to win the accolade.

“Every challenge brings something different and I get better each time I fight. I believe I am world class and it is only a matter of time before I am up there with the big names. I am a man on a mission and not going to be stopped. I’m ­looking for fireworks on Friday, and a ­devastating performance,” he ­explained.

Promoter Frank Warren is ­calling Dubois “the best young heavyweight in the world”. 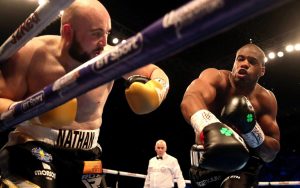 “It’s a burden I have put on him,” explained Warren. “We know he has power, but Daniel can box. He is not just a cumbersome clubber. He is the best young heavyweight I’ve been involved in.”

Warren has even gone as far as to compare the fighter’s jab with that of Larry Holmes, the former ­heavyweight great, who reigned for over seven years, and 19 ­defences, behind an imperious jab which he was renowned for.

“The Larry Holmes compliment is great to have, especially from Frank,” said Dubois. “He has been in the business a long time and knows what he’s talking about.”

Adams has made slow progress, turning professional after Rio 2016 and reaching 5-0 in her career. She was recently upgraded to WBO ­interim champion after holder Arely Mucino was ruled out with a long-term injury.

“I’ll be nervous on fight night, but it is good to be back,” said ­Adams, out for 11 months. “If I wasn’t nervous it would mean I am underestimating my opponent. I have been sparring with Kid ­Galahad [Barry Awad] who is really difficult to hit. If I can land on him I can land on anybody. Maria will stand in front of me and they are the best to face because they’re there to get hit. I have a lot of goals. I want to unify the flyweight division and this is the first step in the right direction. It means a lot to box at the Royal Albert Hall where my hero Muhammad Ali did. It is special.”