Andy Ruiz Jr has played down accusations that he has gone soft after enjoying the luxuries of claiming Anthony Joshua’s three heavyweight world title belts as the pair prepare to meet again in Saudi ­Arabia on Dec 7.

Ruiz claimed that the riches that have come his way were “just material things” and that retaining the title remains a deep desire.

Dismissing Joshua’s assessment that the third-round knock-down in June was “a lucky shot”, Ruiz said: “Anthony said it was a ‘shot from the gods’ and I agree – it was a shot of the gods because I have been praying and wishing for that opportunity for a long time.

“I’m confident about the rematch, but I don’t underestimate any fighter. I know AJ’s going to come stronger and more focused but inside the gym, like Mike Tyson says, everyone has a plan until they get hit.

“I’m sure everybody was trying to look for an excuse and reason why he didn’t perform and why he lost. I think it was down to the style. Styles make fights and I’ve been calling AJ out for a while. I knew his style was perfect for me and that’s why I plan to do the same thing.” 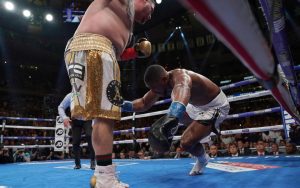 Joshua has come under fire for refusing to take a stance on Saudi Arabia’s human rights record, saying: “I feel like I stand in the middle and I feel like boxing is just trying to open up the barriers for people to travel and see it.”

Ruiz, meanwhile, insisted the necklaces, watches, cars and new million-dollar home he has bought for his family, were “just material stuff”.

“Yes, material stuff I always wanted. But what I really want is a legacy, not just 15 minutes of fame. The main thing is that I remain humble, stay disciplined, stay training and continue to be champion.”

Having taken an invite to Los ­Pinos to meet Andres Manuel Lopez Obrador, the Mexican president – the 29-year-old having become the first Mexican heavyweight champion of the world after his triumph at Madison Square Garden – Ruiz is also enjoying being a totemic figure of strength for Mexican Americans.

“Ever since I won the world title I’ve been having so much love from my people, from a lot of different people. I understood that because I don’t want to let my people down, my fans down. This is something new for me, but I don’t want to give it away. I want to train hard. I know Joshua is going to come hard, so I have to train even harder.

“Meeting the Mexican president was amazing. It meant a lot. People asked me if I wanted to go and visit the White House, but I said I wanted to visit the Mexican White House. It was a beautiful experience, taking my team, my family, we all got to enjoy that. It was a big experience, so much love, and I’d love to go back. The main thing for me is to keep representing Mexico, my people. Some of them have come and thanked me, they have.

“This is what we do it for – my people and especially my kids.”

Having spent three days alongside Joshua on a three-leg media tour last week taking in Riyadh, New York and London, Ruiz assessed what he saw in Joshua, and believes the heavyweight challenger may now have doubts. “His eyes are focused and all that. But deep inside we don’t know what he’s really thinking. We all have doubts. Everyone has doubts. But it’s our choice to overcome them. A lot of people when we are talking say ‘it was a punch from the gods’, but God is still with me. We don’t know what he’s thinking in his mind. I don’t know if it’s about the payday or something else. But we will be prepared. The belts are going to be in the air and it’s my job to win.

“I still respect Anthony Joshua. I’m still a fan of what he has done in boxing. He’s been a champion. But inside the ring, as I told him, there’s no friends, there’s no respect, it’s just me and you, trying to rip each other’s face off. In my eyes, when I’m in the ring, I feel he’s there trying to take my kids’ Cheerios, their fruit juice. That’s what gives me the extra motivation.”

He added: “I know that I was controlling the whole fight, as well. But there were some things I could’ve done a lot better. I was hesitating as well. That’s why we’re going back in the gym to do those things better. I’m excited to defend these belts on December 7.”