Tyson Fury on Saturday laughed off heavyweight rival Deontay Wilder’s request for him to step aside for the World Boxing Council champion to face the winner of Anthony Joshua and Andy Ruiz Jr in a unification of all the heavyweight belts before praising promoter Eddie Hearn and Anthony Joshua for taking boxing to a new audience in the Middle East.

Fury, speaking on the eve of fight week in Las Vegas as he prepares to face unbeaten Swedish heavyweight Otto Wallin at the T-Mobile Arena next Saturday, explained: “I’ve heard about Wilder saying he wants to pay me some step-aside money [for Wilder to face the winner of Ruiz-Joshua 2] but I wouldn’t take £50 million to step aside because it doesn’t mean that much to me. I only care about winning and victory.

“I don’t care if he’s got 104 belts. Belts are lovely things to have, to hold, to win. But it’s about more than a belt between me and Deontay Wilder, I want to beat the man himself.”

There has been no frustration, added Fury, in not organising a rematch with Wilder this year following their controversial draw last December, the plan is to fight the WBC champion twice in 2020. “No frustration. Rome wasn’t built in a day,” said Fury. “Big fights take a lot of building, as we saw with Manny Pacquiao and Floyd Mayweather. That took five years. I intend to bear Wallin, fight Wilder in February, again in June and the winner of Joshua and Ruiz in December 2020.” 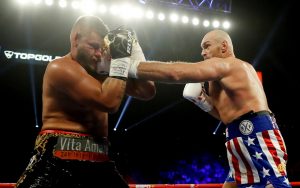 Reflecting on his mental health, and a 10st weight loss last year, Fury revealed: “I train for my own wellbeing now. I can’t remember the last day I didn’t train. I’d say it’s probably a couple of years ago. Even when I’m out of training camp now I train twice a day. I used to worry about everything. But I finally found out that nothing is worth worrying about because I can’t change it. That’s how I live my life now. Nothing is ever going to put me back to the dark places I was because it’s not worth going back there.”

On Joshua and Hearn being criticised for taking the world title contest to Saudi Arabia, Fury disagreed. “It’s everyone to their own,” he said. “This is the prize-fighting game. The great trainer Emmanuel Steward once told me that if you want to become a superstar in this game you have to travel the world and fight in different continents. So fair play to Eddie Hearn and fair play to Ruiz and Joshua, they’re out there representing themselves and putting themselves on a global scale.

“Isn’t it fantastic that they’re able to bring world championship boxing to a desert where people don’t normally get events like that? This weekend there’s the MMA fight in Abu Dhabi, then the World Cup coming up in Qatar, and now we have the big fight with Joshua versus Ruiz in December. Great that people in the Middle East are seeing events on home soil, because they’re usually in the UK or America. And although I’ve come to America to crack America as great British fighter have done in the past, I’d never rule out going anywhere. The top of my wish list would be to go to Antarctica. We could give those people something to look forward to.”