Cheick Guillaume Ouedraogo, commonly known by his fighting sobriquet as ‘Cheick Kongo’, is not a happy bunny. Or, at least, the veteran kickboxer and mixed martial arts fighter has not been been revelling in joy for some time. More like dancing over swords.

Ignored, jilted, insulted even, the French-Congolese has been spitting expletives at every post-fight press conference in recent times. The big fella had not been included in Bellator’s eight-man Heavyweight Tournament Grand Prix, which culminated earlier this year, and you got the sense, figuratively, at least, that Kongo’s massive kicks were hitting brick walls in anger and frustration.

While he steamed from the gills, the likes of Chael Sonnen and Rampage Jackson, chosen ahead of him, took the berths he believed were his. It really did not sit well with him. Yet fighters are the gladiators, not the emperors, and ‘Kongo For Real’ fought for the freedom to contest the belt.

Now, perhaps, he is free. Certainly free to express himself in fighting terms.

Meanwhile, in a parallel Bellator fight league universe, Kongo was racking up victory after victory on undercards, beating men up, anger and determination driving him.

Concurrently, now incumbent heavyweight champion Ryan Bader made his way through the tournament with wins over Mo Lawal, Matt Mitrione, and then quickly, in the final, against Fedor Emelianenko, iconographically, at The Forum, in Inglewood, in January.

Yet to San Jose this Saturday night – at Bellator 226, the main card of which is live in the early hours of Sunday morning on Sky Sports Action HD – and Kongo has the opportunity to put the wrongs to right against Bader, straighten up some injustices in his mind, in the tussle for that heavyweight crown he covets. 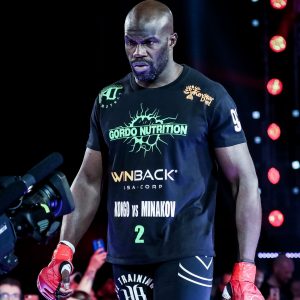 Undefeated in eight straight fights now, just once in his last eleven, and even that, to Lawal, a split points loss, Kongo had the air of a fighter feeling mean, moody and magnificent right now as he intends to take the belt from Bader, and let out a roar inside himself.

A roar which has seen him unbeaten since 2015, and just twice in the last six years. The defeat to former Bellator heavyweight champion Vitaly Minakov, indeed, has even been avenged, in a title eliminator in February this year. It was also Minakov’s only career defeat in 23 fights over nine years.

Kongo is a laid-back character, and having known him for almost fifteen years, I have never heard him speak with such deep determination. Nor is he a man given to pushing his own cause hard. Perhaps that is part of the problem in this modern age of Twitter spats and Instagram stories.

No, Kongo belongs to the old school, a born fighter, now 44 years old, but still a magnificent sculpted athlete-fighter at 6ft 4ins tall and 242 pounds. Even against Bader, the style match up does not really suit him. Bader will look to take hold of those long limbs and take the fight to the floor.

You might think that Kongo has pushed his wrestling defence for this heavyweight match-up.

“Honestly, not that much,” Kongo tells The Daily Telegraph, keen to assert that he has waited a long time for this moment. “I’m not a kid anymore. My heart has turned to stone. I will do what I have to do. I want to make this story for myself, but there’s no pressure on me. I do this every day. I just need to make them realise I deserved this position.”

O Kongo Miserum. Not being in the tournament hurt him. His pride, no less. “I don’t know what I had to do to get better or get their attention. It seemed I had to fight everybody,” he told me. “I had to kill the whole division. I’m not here to complain and say the reason why I was overlooked, but five years is long. I’m not going to criticise the business, but there was disrespect.”

Kongo’s plan is to take it all out on Bader in this fight, which can run to five rounds, if it has to, between these huge men with bare feet and 4oz gloves.

Bader might have stepped up from light-heavyweight and become a champ-champ, as they call them instead of the old two-weight champion, but Kongo sees Bader as a genuine threat. “The danger with him is coming from everywhere, and I’m not expecting anything new. I know what he’ll do.”

“I think he’ll be more devastating than me, maybe, even in the striking. But I’m used to heavyweight fighters. I don’t have anything bad to say about Bader. He was picked to be in the tournament and he is good. He showed up and did what he had to do. But I wasn’t given the chance.”

Then the rub for Kongo. “For sure, he has something that’s mine. I hope it’s going to be an easy fight, I wish he’ll be really bad. But you never know what to expect during a fight. There could be crazy moments in five rounds. But I’ll be there, facing him.”

On the other side of the fence, the American Bader, who has not put a foot wrong in his Bellator dance of 5-0, is taking the challenge of the French-Congolese fighter as intensely as any fight of his career.

If Kongo might not be dominant wrestler-striker Bader’s most difficult stylistic challenge, he certainly has momentum. “I felt Mitrione was a tough fight stylistically. And Fedor too. Look what happened when Chael took him down. With Fedor, there were so many variables. But Kongo poses different challenges for sure.”

“He’s a good kickboxer and has good offensive wrestling. But at the same time, I’ve dealt with all these heavyweights fine. I’ve been knocking them out. It’s not like he’s a crazy, active striker. I feel fine whenever the fight goes.”

Bader, of course, has the pressure of holding two belts. “There’s always the pressure to win. You might be fighting for the title or you might be on a loss. I’ve always come from that background where you’re in the back and walking out, this is the biggest fight of your life,” Bader told The Daily Telegraph. 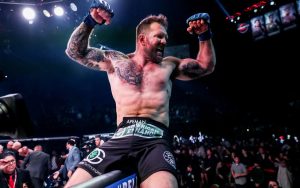 “The titles are awesome, but they’re not with you inside the cage. You’re competing right then and there. Every fight in front of me is the biggest of my life. I had a great time in the heavyweight tournament and everything that came with it. But that wasn’t on my mind when I was training or competing in that fight.”

But which ? “I don’t know. I’ve had a lot of success at heavyweight. I’ve fought the last three at heavyweight and this is heavyweight too. I plan on going back down and doing a few fights there. If I defend that title, I plan on doing it again so my body can stay there. Jumping back and forth every fight would be tough. The division deserves that too. That’s how I envision it playing out, anyway.”

It is certainly an intriguing prospect going into this fight, with Bader’s wrestling, and his ability to take Kongo down, likely the key if the taller challenger has success with his striking.

For Kongo, a man who has fought on three continents – seven countries since 2001 – victory could spring greater riches, greater spoils. There could be the prospect of fighting in France next year if he were to win the championship, with Sports Minister Roxana Maracineanu – the first women’s world champion swimmer from that country – lifting the ban on MMA this year.

There has long been opposition to MMA in France, and with Bellator’s burgeoning and ambitious plans in the European market already underway, Paris or one of the leading cities such as Monaco could well become a new destination.

“For sure, we would be proud to fight in France. It would be great, there’s so many French Africans too,” Kongo told The Telegraph. That would a dream and one for the future generations. It would be great for the people and people would realise France is a great venue for fights.” But first, he needs to get the job done. Saturday night is all about fighting. And winning.