The Ukrainian was brilliant, but Campbell was as well, Lomachenko taking the championship 119-108 on two of the cards, and on the third 118-109.

Written off in all quarters, badly hurt at the end of the fifth, and down in the eleventh, Campbell showed with precision and effort why he was once the most decorated amateur in British boxing history.

Not since the Olympics in 2012 had a British crowd cheered so loudly for an overseas fighter as ‘Loma’ made his way to the ring. Wladimir Klitschko was here, Oleksandr Usyk too, both world champion Ukrainians applauded just as loudly.

It was cagey for the first two minutes, as the two boxers shadow danced, before Campbell landed the first blows and took the opening round. Lomachenko nodded in appreciation. Another excellent round from the Hull fighter followed, but the champion was just beginning to edge into range, landing two attacks of his own, finding his groove. 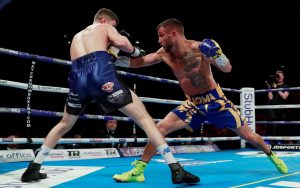 Yet Campbell kept up a ferocious pace, as Lomachenko stepped up his attacks in the fourth, the fight a brilliant technical battle to witness. A left hook to the chin and then more assaults to the Campbell’s torso took their toll.

Never physically broken, yet mentally fatigued, Campbell threw more obdurate salvoes in the sixth, but another punishing assault soon followed. Campbell was felled in the eleventh by a shot to the body and a short straight right.

This was the third defeat on Campbell’s 23-fight record, but by a long way his most impressive boxing performance – and against the No 1 pound-for-pound boxer in the world.

Earlier, Charlie Edwards’s second ­defence of the World Boxing Council flyweight ­title ended in controversy with a “No Contest” declared after the ­champion was hurt and went to the ground after a ferocious body assault in the third round by the challenger Julio Cesar Martinez Aguilar of Mexico.

Referee Mark Lyson counted ­Edwards out and called the fight over. However, the television replay showed clearly that the defending champion, from Croydon, had been punched in the ribs when he was on his knees.

The O2 crowd went into uproar as the replay played on giant screens and Edwards’s trainer Grant Smith remonstrated with officials as promoter Eddie Hearn mouthed that it was a disgrace.

“He did hurt me, but that’s why I took the knee, but he did hit me when I was down,” said Edwards as he was interviewed in the ring and the Mexican and his team celebrated. But that was to change within a few minutes.

“The Boxing Board of Control do not allow replays but the WBC does,” said Hearn on the broadcast. “Mauricio ­Sulaiman, the president of the WBC is here and we are expecting him to make a decision and order an immediate ­rematch.” Sulaiman was then interviewed, revealing that the fight had been unfairly finished.

“I truly believe in instant replay. The kid was hit while he was down,” ruled Sulaiman. “It was an accident. There’ll be an immediate rematch. The WBC has man instant replay rule, and this fight will be ruled a no-contest.”

Edwards has time now to create a new plan with Smith, knowing that Martinez brings body terror with his fists when they meet again.

Heavyweight Hughie Fury dropped to his third defeat in his 26th fight, but first contest under the Matchroom Boxing banner, against experienced Alexander Povetkin. Fury withstood the heavy single punch attacks, but was outworked throughout by the former Olympic gold medalist, who took control of the bout from the fourth round onwards to take the honours, 117-111 on all three judges’s cards.

Still on the undercard, Joe Cordina retained the British lightweight title on points against Gavin Gwynn in an entertaining all-Welsh clash. Gwynne, three inches taller at 6ft, put up a game challenge in losing his first contest in his 12th fight, outworked by the new “Welsh Wizard”, the sobriquet ­employed by Cordina, who continues to improve and moved to 10-0.