Vasyl Lomachenko, who defends his world lightweight titles against Hull’s Luke Campbell this weekend in London, hiked up his t-shirt to reveal the image of his father Anatoly’s face tattooed on his torso.

Without mutual devotion and dedication, the 31-year-old explained to The Daily Telegraph, he would not be regarded as the most skilled boxer in the world today. They started work together when he was aged four. “There is a tradition in Japan and my father raised me up like a Bonsai Tree. My father is not just a father. He is more than that.

“What you see today is what my father created. My father is still in the old school. He doesn’t like tattoos. We young people live a different life, so I felt I needed to do it. I wanted to show my appreciation to my father. I did it and now it’s going to be with me forever.”

And little wonder the Ukrainian boxing master has carried himself with a broad smile and a skip in his step this week. It must feel as if London were his hometown. At every turn, boxing fans have jilted Campbell – who challenges the man known as ‘The Matrix’ for his lightweight world title belts at the O2 Arena, Docklands – as they have clamoured to greet, get a selfie, or even just touch Ukraine’s most revered sportsman from Bilhorod-Dnistrovskyi, on the Black Sea coast.

With just fourteen prize fights as a professional boxer, the ring generalship of the 5ft 6in tall, 135lbs fighter and his sublime skills have earned him world titles in three weight divisions. He is now widely considered to be the number one pound for pound boxer in the world, an accolade held previously by Floyd Mayweather, and then Andre Ward. Both were long-term, undefeated kings of the ring. 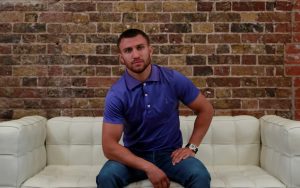 London remains a very happy hunting ground for ‘Loma’, the scene of his 2012 Olympic Games triumph, a second successive gold medal following victory in Beijing in 2008, the highlight of an extraordinary amateur career totalling almost 400 fights with just one defeat – and even that one is disputed – all overseen by father Anatoly, his coach and mentor, who also took him to acrobatics, gymnastics and circus skills schools as part of his training.

On Wednesday night’s ring workout at the East End Mecca for boxing, Bethnal Green’s York Hall, Lomachenko juggled four balls in the ring, bounced a tennis ball, attached by spring cord to a baseball cap, effortlessly from fist to fist and demonstrated why his combat skills are so revered.

Again, his acquisition of skills has been the lifetime work of the old man. “It’s not a usual situation. Our relationship is genetic, a genetic connection. We complete each other,” Lomachenko explained with his father watching in the background. “Of course, it’s not simple. But it works. We know a lot of examples of father and son not having a good working relationship in sport, but we work.

“Sometimes there are contradictory feelings. But I respect him in my heart. Like any family, not everything is always good. There are differences. It’s not master and pupil all the time. We have a training process, a family situation and other specific situations.”

Put simply, what does make Lomachenko so good? His timing, fighting IQ and ability to dance and create angles enables him to dominate as an aggressive, counter-punching southpaw. He works out his opponents within a few rounds, and then breaks them. But there is never a set plan, he told The Daily Telegraph. “When I go in there, I don’t know what I’m going to do. I don’t have a plan. I can’t tell how difficult it’s going to be. I need to feel it. I need to go a couple of rounds and then adjust to my opponent’s size and his reach. I will take some time in the ring, a couple of rounds, to figure him out.”

Being in London does feel special. “I have wanted to fight in London ever since I turned pro,” he explained yesterday. “The fans appreciate my boxing style, and every time I’ve come here, they make me feel appreciated. Luke Campbell is from the UK, but I feel very comfortable. I am 100 percent ready for whatever Campbell brings.”