Anthony Yarde fell short in a valiant attempt to win the world light-heavyweight championship in Russia on Saturday night.

The 28-year-old Londoner was stopped in the 11th round by champion Sergey Kovalev, the wizened, durable home favourite in Chelyabinsk.

Yarde showed much heart and ambition but Kovalev, holder of the World Boxing Organisation belt, outboxed him for all but two rounds in a one-sided contest.

Kovalev, in his 16th world-title fight, showed again his array of skills, while surviving an assault from Yarde in the seventh and eighth rounds.

It had been hoped that Yarde might do to the 36-year-old what Tyson Fury had done to Wladimir Klitschko in 2015, or what Joe Calzaghe had done to Chris Eubank Sr at super-middleweight 22 years ago: pull off a major upset against a formidable champion.

Yarde, a physical specimen at 175lb, had demolished 17 of his 18 victims in an unbeaten career prior to this fight. But there was no yardstick by which to judge accurately whether the fighter from Hackney, ranked No 13 in the world, with just 51 professional rounds under his belt, had the wherewithal to dethrone the best in the division. 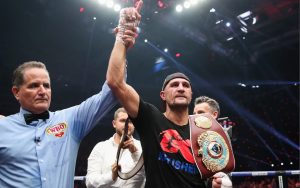 In short, Yarde lacked experience and it showed. But Yarde will have learnt so much from his first career defeat.

The Russian, known as ‘Krusher’, was defending a title that he won from Welshman Nathan Cleverly in 2013.

The fight set into a pattern early, as the hard Russian dominated with his thrusting jab. Yarde had some success with a sharp right in the opener but Kovalev edged the stanza with that jab, and his aggression.

Kovalev also dominated the second round, even though Yarde landed a sharp left hook late on. “Relax, stay focused, keep the left hand up,” said the champion’s Hall of Fame trainer Buddy McGirt. The home fighter followed the advice perfectly, working behind his ramrod jab, winning the next two rounds, though Yarde wore the punches well, showing a great chin against an opponent with a 76 per cent knockout ratio.

Yarde was outboxed for the first four rounds, yet still looked composed and focused, coming out hard in the fifth, as they exchanged heavy blows. Kovalev landed a heavy left, though the champion was showing some fatigue, and the Londoner landed a telling power shot of his own on the bell. Going into the sixth, already five rounds down on my card, Yarde was still struggling to find the range against an opponent with vast experience in both the amateur and elite ranks. 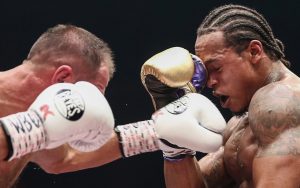 The seventh and eighth were Yarde’s best rounds. He landed his best left-right combination of the fight and three left hooks to the body in the seventh, which visibly slowed the older man. The method had been found: go to the body of the champion. Yarde refused to back down and in a thrilling end to the eighth, he assaulted Kovalev with a barrage of left and right hooks, the energy draining from the title-holder, now almost out on his feet.

Kovalev hung on though, and imposed his will on the fight once more. His resolve was extraordinary after that harrowing eighth round.

Tunde Ajayi, Yarde’s trainer, implored his man to step up the pressure, but Kovalev was set, having escaped the proverbial guillotine in the ninth. Yarde was then thwarted by the rapier hands of his opponent. In the 11th, it was over, suddenly. A sharp straight left put Yarde down. And out. Exhausted, spent, having given his all, there was no getting up.