Anthony Yarde pledged to come back stronger after the first defeat of his career to Sergey Kovalev for the WBO light-heavyweight title in Russia last night.

Yarde’s inexperience was unquestionably the telling factor when he was stopped in the eleventh round by the champion. The adage that you cannot buy experience never more germane than in this contest.

Yarde, who had never gone beyond seven rounds in his eighteen-fight career, succumbed to exhaustion in the championship rounds, having come within seconds of halting the world’s No 1 ranked light heavyweight as he attacked the body of the Russian in the seventh and asserted a major assault in the eighth round.

“I will be back. I took a big risk for a big reward, because I don’t fear opponents. It didn’t go to plan this time, but my mentality stays the same,” Yarde said afterwards, having shown a great chin, guts, heart, fearlessness – and inexperience – in equal measure, as he was comprehensively outboxed by the wizened champion.

“You’re a great fighter. You have a great future, believe me. You’re good,” Kovalev told Yarde in the ring, before adding: “He is strong. He has good IQ, good defence and he’s active, just not enough experience. I won by experience. 100 percent he will be a champion.” 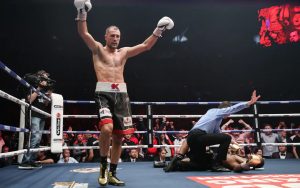 Tunde Ajayi, Yarde’s trainer, came under fire from fans after the world title contest for his lack of technical advice between rounds, but he said: “Last night the whole world saw what Anthony, myself and our whole team were made of. We came from nothing and made it happen.”

There was resounding praise from former two division unified champion Andre Ward, who twice defeated Kovalev. “Anthony Yarde was 2-3 punches away from stopping Kovalev. Yarde can fight, he just needs to make adjustments with his camp. Respect to him. Kovalev proved he’s still got something left, but he needs to grab that fight with Canelo. At this point, every fight will be hard for him.”

That seems to be the option for Kovalev, being lined up to fight Saul Canelo Alvarez – the Mexican moving up a third weight division – likely in November. The path for Yarde remains less clear, though a fight with the likes of Britain’s Callum Johnson, ranked in the top 10 by three of the world’s sanctioning bodies, being one of the options moving forward. But it is time to go through the gears again for Yarde, who will have learnt so much in spite of the obvious setback.