Amir Khan’s first venture into Saudi Arabia ended with a convincing fourth round stoppage victory over Australian Billy Dib on Friday night, with the Briton losing no time in calling out boxing politician Manny Pacquiao for a super-fight in Jeddah early in 2020.

Pacquiaio, now 40, fights Keith Thurman over the World Boxing Association welterweight title in Las Vegas next weekend. “I want to face Manny Pacquiao in Jeddah, Saudi Arabia in the new year,” said Khan after the victory.

Khan had returned to the ring just 12 weeks after urinating blood from body shots and being stopped by a punch to the groin in the sixth round at the hands of undefeated three weight world champion and top-ranked pound-for-pound boxer Terence Crawford at Madison Square Garden, New York, in a bid for the World Boxing Organisation crown.

But this was an altogether different level and given Khan’s skills, it was not difficult for the 32-year-old to look impressive at what had been dubbed the ‘Red Sea Fight Night’ extravaganza. Khan showed great confidence and his blistering hand speed to claim the thirty-fourth victory of his career, against a late notice opponent in Australian Dib who had campaigned two weight divisions below the two-time world champion when he was at his best. Dib took the fight on three weeks’ notice after Indian boxing and mixed martial arts fighter Neeraj Goyat was injured in a road traffic accident.

The importance for Khan was that his handspeed was still there, and that he executed the job perfectly, but it needs to be seen in the perspective of Dib was the smaller man – just as Khan was when he was outgunned against Saul Canelo Alvarez at middleweight in Las Vegas three years ago. There are weight divisions for a reason in boxing. 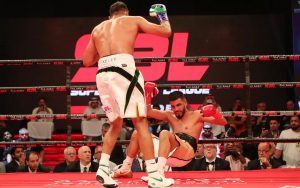 Referee Ian John Lewis had to pull Dib off Khan regularly in the early exchanges as ‘The King against The Kid’ started cagily. It was a slow start from Dib, moving and staying on the outside, with Khan stalking his foe. But Khan methodically broke Dib down, a left hook to the body visibly hurting him in the third, with Khan loading up with bigger shots in the fourth, finishing his foe with right and left hooks to the body and a thumping left hook to end the assault to leave his rival slumped against the ropes. Thereafter followed a red towel flying into the ring from the downed fighter’s corner. Job done.

Earlier, Hughie Fury defeated the former WBC heavyweight champion Samuel Peter who withdrew in the seventh round of their foul-filled scheduled twelve round contest claiming an injured shoulder to referee Ingo Barnabas, but the official could have disqualified the Nigerian who consistently hit the cousin of the lineal heavyweight Tyson Fury with rabbit punches and low blows.

Peter, 38, also missed with wild shots and found himself outboxed by 24-year-old Fury’s jab and movement, as the Briton dictated the fight from distance.