Now the inaugural Bellator women’s featherweight champion, Budd headlines at the WinStar World Casino, Thackerville, Oklahoma, on Friday night, defending her crown for the third time against unbeaten Israeli Olga Rubin, looking back on a learning curve that now amazes her – with just two career defeats in a 9-year, fourteen-fight resume: Rousey (by armbar submission – what else ?) and Nunes (by punches- in 14 seconds). And we now know what Nunes can do.

The ultra-athlete Budd really was thrown into deep end, with those major fights in the first year of her career. “Look at that first year and what I experienced in professional fighting. I’m still grateful for it, even at the time the losses were hard. Especially for me, I’m so competitive and I’ve been a fighter my whole life,” Budd told The Telegraph.

“To go in and lose, it was devastating at the time, but now looking back on it I couldn’t have asked for a better road to start on. I learned such important lessons early in my career and I credit my undefeated streak to those losses. I really learned from those losses. I wouldn’t change it even if I could.”

Losses can be ‘learns’, of course, and Budd has never forgotten them. They are imprinted. “It feels like those losses were last week. I think about those when I get a new fight. I think about those important lessons. I feel I’m on a roll, but it’s because I’ve learned so much in my career.”

Budd learnt what it was like to be the underdog. “I’ve always been brought in to lose. Even my first fight with Strikeforce, I got brought in to fight an undefeated fighter they were building up to fight Cyborg. I’d never done MMA before. Looking back on my career in boxing, kickboxing and MMA, it’s really developed me into the athlete I am today. I’m proud to be a veteran that’s still here and I’ve got so much more to show of my skill level. I feel I’m growing every day. I can’t wait to get in there and put in the best performance of my career.”

Budd sees women’s fighting reaching new levels almost week by week. “Yeah. The publicity and fan base grows in momentum every year and it’s exciting. Scott Coker has always believed in the female athletes. I think Bellator has two incredible divisions and I couldn’t be more proud to be the champion of the 145lb division.”

Budd would even entertain a plan Bellator and Coker may have of cross-pollenating with a champion versus champion fight against undefeated Rizin FF heavyweight queen Gabi Garcia. Coker has already brought together men’s bantamweight cha impious Darrion Caldwell and Rizin’s Horiguchi.

Budd is keen on Bellator bringing a show to her native Canada in the near future.

“I hope it’s soon, very soon. I believe they’re going to start working on a British Colombia card, at least I’m hoping they will. It would be huge – for my family, friends and my gym. We own a local gym. Everyone would be able to come and bring their children. All the kids we train would be able to support me. It would be huge for me. I think we’d sell it out and I’m really hoping Bellator comes to BC.”

In Rubin, the champion faces an opponent who is unbeaten, determined. “She’s hungry,” explained the champion. “She’s 6-0 as a pro. She’s southpaw. I see she’s well-rounded. The last girl I fought was a black belt world champion, (Brazilian jiu jitsu expert Talita Nogueira) super-specialised in one area. I feel Olga brings a different flavour because she’s well-rounded.”

“I found out about this fight at the beginning of March, after she won her last fight. I’d seen her fight. We talked to Scott Coker and (matchmaker) Rich Chou. They needed a headliner and it sounded like perfect timing. My training camp has been pretty long for this one, but I’m always training and in the gym. So I’ve been focused on this fight with Olga since March.” 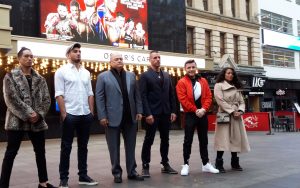 Viewing figures were close to one million for the Bellator London event (number 223) – shown in sequence on Sky Sports and then Channel 5 on Saturday June 22, and on Virgin in Ireland – at which Rafael Lovato Jr claimed the Bellator middleweight title from Gegard Mousasi over five hard-fought rounds. Channel 5 peaked at over 700k viewers, it its understood. A powerful projection for the fight league which has ongoing broadcast deals with both Sky and Channel 5 to air events live.

The London card brought significant victories for welterweight Paul Daley, the Irish favourite at bantamweight/featherweight James Gallagher (who will headline in Dublin on Friday September 27 at the 3Arena against Sunderland fighter Cal Elennor) while Dutch kickboxing legend Melvin Manhoef fought a savvy battle in his penultimate fight against Kent Kauppinen. Bellator plans to have Manhoef headline in Amsterdam next year in an expanded European series that will go into double figures in events.

AJ Agazarm has something about him. The need to be on a journey of self-discovery. He also has a formidable team around him. Kron Gracie as a class-mate and Nick and Nate Diaz, Rudi Hernandez, Jake Shields and Gilbert Melendez to bounce off and learn from. Agazarm – ‘the Florida Boy’ – who moved from the east to the west coast to train with a group of professional fighters whom he says “have helped revolutionise” the sport of MMA, lost on his debut in Bellator. Points defeat to Jesse Roberts.

Yet undaunted, he will roll up for the WinStar Casino Thackerville event on Friday night, the kid of Armenian descent facing Jacob Landin.

Agazarm’s aspirations are simple. He even reckons he could get down to 145 to join Bellator’s soon-to-be-announced featherweight tournament, involving eight fighters on two different nights in the autumn to set up the quarter-final bouts. The fight league’s welterweight and heavyweight Grands Prix have been a major success and selling point over the last year, with digital broadcasters having weighed in with their interest and a US $140 million deal for three years of eight exclusive events per year.

Agazarm told me: “I’ll fight whoever Bellator wants me to fight. They can throw several names at me. I’d fight two guys in one night if they want me to. They have me contracted for four fights. I’d like to turn that into something. My first fight was at 160lbs and this one will be at 155lbs.”

“If I’m being completely transparent, they have this 145lbs bracket in the Fall and I want to do that. I’m going what I have to do to get there. I also have the Submission World Grappling Championships in September. That’s at 145lbs. I think given the style I’ve sort of crafted over the last 15 years, it’s in a better position than it was when I first took that first MMA fight. I have wrestling, grappling and jiu jitsu.”

He added: “Being out here is about putting it all together with striking and boxing. I want to use these skills and see them blossom. Whoever’s in front of me, I don’t care. I don’t care who it is, I just want someone there. It’s not like jiu jitsu where I can go weekend to weekend and tournament to tournament. It’s been six months since my last bout. You can imagine what mental warfare has been going on in the last six months.”

Is Agazarm like the ‘Fifth Beatle’ out in Stockton ? “I don’t know about that. We got in some late night work yesterday. We were there until 6 in the morning doing weight training and active recovery. It’s really fascinating. It’s not just something you kind of do, you’ve got to have both feet in and commit to it. I think that’s what you learn out here.”

I put it to Agazarm that the team are using ‘natural rhythms’.

“Yeah, I think that’s important for when you’re out there. At least in my experience, I had a lot of data to pull from on my last fight. It’s important to get into the rhythm so it becomes almost effortless. I consider myself just like anyone else, not unusual. And part of being a really good explorer is knowing when to stop exploring.”

Is he involved with an unusual group of people ? “I see them as extraordinary guys doing extraordinary things out here. They’re shouldn’t be any reason, if you’re training as an MMA fighter professionally, why you wouldn’t be out there training with these guys.”