Nathan Donald Diaz is proving as elusive as the fight we are hearing and want to believe he will be having this summer, with Conor McGregor or Khabib Nurmagomedov. Or better put, Diaz remains as invisible as he has been in a UFC Octagon for nigh on three years. Indeed, it was in Las Vegas on August 2016 amidst a sea of green and a wall of partisan noise that Diaz, then 30, lost to McGregor on a majority decision in that brilliant rematch at UFC 202 which became an instant classic. Surely the trilogy fight is just around the corner ?

But in a Hunter S Thomson-like whirlwind tour and chase around the early spring sun-dappled land of Northern California, I find myself driving from San Francisco to Stockton on the vague promise of an interview with said Diaz. He’s now a cult figure of course, his hip take on cannabinoids making him as totemic a figure as his stance on staying true to himself within the streetwise counter-culture mob in the USA. Little has changed. Apart from the fact that he had become, like his brother Nick, more elusive. Of all his fighting associates, including his brother, Nate has the major victory on the biggest stage. The victory over McGregor, and his participation in the second and the fourth biggest UFC pay-per-views of all time at 1.5 and 1.65 million.
As with anything involving the Diaz brothers, though, getting to them can be hit or miss. Unless they are turning up for a fight, of course. Nate’s elder brother Nick has been ‘retired’ over four years. But once here in the mix, I’m soon to be told he is back in training. Training for triathlons, or training for lifestyle, or training to fight, is not immediately clear.
At every turn in the narrative of this pursuit of an interview, Nate has always moved on, yet everyone left in his wake seems to be telling me that he really is in training for a fight, there is ‘something in the air’, and that he will be back. I speak with Gilbert Melendez, Jake Shields, Cesar Gracie – all the old Skrap Pack faces – AJ Agazarm, who is living and training with the Diaz brothers, Rudi Hernandez at the Nick Diaz Academy, and to a man, they believe Nate is on his way to returning. But you should ask him, they also say. Easier said than done.
In spite of texting each other on a Friday to meet at the Nick Diaz Academy in Pacific Avenue in north Stockton the next morning, Nate proves hard to pin down.
But as Fighters Only Magazine went to press, the signs were there from so many people around him that a storm is gathering. An itch in the ‘Skrap Pack’ that needs scratching. Forty-eight hours before I turn up at the Nick Diaz Academy, in an area that I am told is ‘middle- class Stockton’, there is a picture posted on social media of Nate, Gilbert and Jake, fresh after training at the academy. A day earlier, Shields, who is snowboarding in Lake Tahoe when he takes my call, confirms that Nick is “back training in Stockton”.
Having told Nate by text that I am on the way to the gym the next day, he responds by a simple ‘yeah come by, what time u comin thru’, and I pin a time. No answer comes back. It occurs to me that perhaps it is Nate’s way of knowing when you are coming, and avoiding you. Paranoia, perhaps, but I will say at this point that I have met Nate on numerous occasions and it has always been cordial. Sometimes an interview. Sometimes not. The last time I had seen Nate, in fact, was with Gil and Keri Melendez, his wife, and Jake, in an outdoors bar in Hawaii in December at a Bellator event. They were in great form.
But when I drive the 60 miles to get to the Nick Diaz Academy the next day, the gym is near to closing up, the Saturday morning children’s classes done. There is no Nate. I call and text him, but eventually the doors are locked by coach Rudi Hernandez, who tells me that Nate is in there, training, most days of the week. “You see these mats,” he says. “Forget about the money earned in fighting, these mats are what will make them rich forever. These mats are the future.” 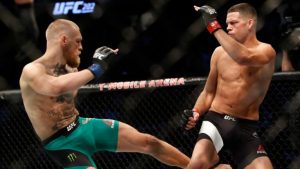 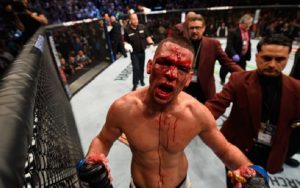 This Article First Appeared In Fighters Only Magazine.