Josh Warrington retained the International Boxing Federation featherweight crown with a split points decision over Barry Awad, aka Kid Galahad, in a scrappy match-up in Leeds.

After a tense build up in the week, Galahad slowed the pace of the fight with clever footwork, but it was the champion’s work-rate that caught the eye of the judges as the all-Yorkshire affair went to the Leeds fighter rather than the Sheffield man.

With scores of 115-113 from judge Howard Foster for Galahad, and cards returned of 116-112 and 116-113 from Steve Gray and Michael Alexander respectively, Warrington made a successful second defence of the crown having taken the belt from Lee Selby last year and then having beaten Carl Frampton late last year in an all-action thriller.

This was by no means an exciting affair, scrappy at best with holding all the way through which nullified most of the champion’s work. Referee Phil Edwards had to pull the two men apart time and again.

Galahad frequently switched to southpaw, making himself a difficult target, but in offensive terms, rarely were there more than single shot attacks. 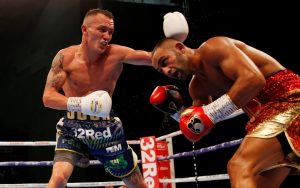 The two men appeared to have settled their bitter rivalry after the final bell. “I was forcing the fight more, but I have to give him credit, he was pretty clever on the inside,” said Warrington, who kept his undefeated record and moved to 29-0.

It was Galahad’s first loss in his twenty-eighth contest. “I put too much pressure on myself and got carried away in the build-up,” added Warrington. “I hope it’s on to America next, I’ve beaten Selby, Frampton and now Barry and it feels like I should fight one of the champions next. It has to be now.”