Anthony Joshua faces a career-­defining rematch against Andy Ruiz Jnr after succumbing to one of the biggest shocks in heavyweight history at Madison Square Garden.

The British world champion was floored four times before a seventh-round stoppage condemned him to his first defeat of a 23-bout career. A reunion against the Mexican-American will take place in the UK later this year, most likely in Cardiff in November or December. And, as Joshua’s promoter Eddie Hearn admitted in New York, it is a must-win bout for his man.

The Briton lost three of the four world title belts on his debut in the United States. “I just have to turn it around a few notches and bring it back my way,” Joshua said. “I don’t want people to drown in their sorrows. One hundred per cent I want the rematch. This will show I have the power and the strength.”

Joshua was outfought and outthought as Ruiz, who took the fight on 5½ weeks’ notice after Joshua’s original opponent, Jarrell Miller, was removed for failing drug tests. There will be comparisons to the night in 1990 when Buster Douglas knocked out the then-undefeated Mike Tyson in the Tokyo Dome. Tyson recovered from it; now the 29-year-old Briton must haul his broken spirit and body up from the canvas and do the same.

“This is Andy’s night, congratulations champ,” said Joshua, who dropped his opponent in a dramatic third round only then to have his senses scrambled. “The vision remains the same. Thank you to everyone who travelled. Big respect to Andy, big big respect. He’s a good fighter. Thank you, America. Sorry I let my friends down, sorry I let my supporters down. There is no excuse. I got caught with a big shot, congratulations to him.” 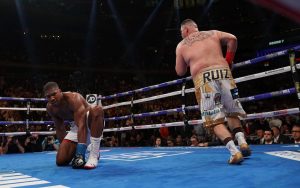 Tyson Fury and Deontay Wilder, Joshua’s biggest rivals, were quick to offer their views on social media. “He wasn’t a true champion,” said Wilder, the undefeated World Boxing Council champion. “His whole career consisted of lies, contradictions and gifts. We know who was running from who.”

Fury, who is also unbeaten, was more sympathetic. “We have our back and forths but Anthony Joshua … [in] heavyweight boxing, these things happen. Rest up, recover, regroup and come again.”

On his shock victory, Ruiz said: “I’m having to pinch myself that this really happened. I want to thank God for giving me this victory. This is what I have been dreaming about. I can’t believe I just made my dreams come true.”

After two cagey rounds, the fight burst into life in the third. Joshua landed flush in an exchange and Ruiz was down. Moving in to look for the finish, Joshua was caught by a counter. Twice he was down, just making it to the bell. On his stool, Joshua was so disorientated he was heard to ask trainer Rob McCracken: “What round is it?”

“That was my first time ever getting dropped,” said Ruiz, who can expect to treble his $3 million fee in the rematch. “It just made me stronger. It just made me want it more. I just had to knock him down back.”

For the next three rounds, Ruiz waited patiently for an opening, showing his fighting IQ and counter-attacking skills. While Joshua’s weaknesses have emerged intermittently in past fights, Ruiz brutally exposed them here.

The champion looked robotic in attack and lacked guile when hurt. He also failed to stick to McCracken’s game plan, with the trainer urging his man to use his jab to open up an opportunity, only for Joshua instead to engage his opponent with attempted heavy punches. By the end of the sixth, with his nose bloodied, Joshua was again heard pleading with his team: “Why am I feeling like this?”.

In the next round, Ruiz sent him down twice more, leaving the Briton to look exhausted, dazed and confused. Ruiz was a worthy new champion of the International Boxing Federation, World Boxing Association and World Boxing Organisation belts.

In the chaos that ensued, Joshua’s father rushed into the ring and appeared to seek out promoter Eddie Hearn. “No, it’s me, I’m the one fighting,” Joshua was saying as his father pointed in the promoter’s direction. Later, Joshua said: “My dad’s upset, which is a natural reaction.” If he was upset then the son was humiliated.

Ruiz put the victory down to his heritage. “It’s because of the Mexican warrior I am, I have that Mexican blood in me,” he said. “I could sense he was hurt in there. I just wanted to hunt him down even more and work the body. I just wanted to listen to the game plan.”

Ruiz agreed that he would have a rematch with Joshua in the UK, most likely in Cardiff at the end of the year. “Of course, man. Right now, I just want to celebrate. I just made history for Mexico. This is what I have been dreaming about since I was six years old.” 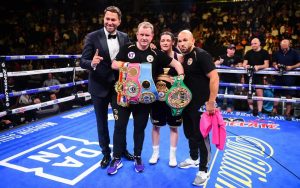 Promoter Hearn said Joshua “was in total control of the fight but he got sloppy and never recovered”. Hearn added: “AJ will come back 100 per cent and we will make the rematch in the UK. But this night now belongs to Andy Ruiz, he made history in the heavyweight division. AJ will be devastated when it sinks in. It makes the autumn rematch a ‘must win’.”

Earlier, Britain’s Callum Smith retained his super-middleweight crown with a one-sided victory over Hassan N’Dam, scoring three knockdowns in a third-round destruction of his opponent.