It was a first-class performance for the fighter who won Commonwealth Games gold in the same arena in 2014. The 28-year-old, who finished the fight covered in claret from two cuts, was well ahead on the cards but employed a risky strategy in the final quarter of the fight by showboating before going toe to toe in a war in the final stanza.

Taylor took the decision 117-109, 115-111 twice, on the judges’ cards in a huge learning fight, and Scotland can celebrate a fine new world champion who had to be at his best against the Belarussian, known as ‘The Beast’ for his toughness and durability. This was the former champion’s first defeat in his twentieth fight.

A mouthwatering clash with World Boxing Association king Regis Prograis awaits Taylor in the final later this year, with date and venue yet to be decided. “This is a dream come true… and the new… I took more risks than I should have, switched off, and took too many punches, but I was comfortable in there,” said Taylor.

“It has not quite sunk in, but I’m so delighted. I can’t wait for the final now. I think I’m the best, Regis Prograis thinks he is the best.” 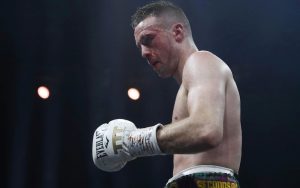 In a contest of non-stop action, the ‘Tartan Tornado’ dropped the Belarussian twice in the sixth round, after being cut above the left eyebrow from a clash of heads in the fifth stanza. In the toughest test of his career, after a cagey opening round, Taylor began to target the body of his foe, avoiding Baranchyk’s wild right hand, clinching intelligently up close, to slowly take over the contest.

With Taylor taking three of the first four rounds, Hall of Fame trainer Freddie Roach began to urge the Belarussian to go to head and body, and the defending came out with greater vigour, the pattern of the fight swinging in favour of the visitor in the fifth, before the unbeaten man from Prestonpans, hunted for his thirteenth knockout. A counter right hook from the Scotsman put the champion down out of nowhere, and once more, head attacks in the corner put Baranchyk down again on the bell.

While the 140lbs scene has been bolstered by the WBSS, the bantamweights have also been flourishing in the spotlight, not least Japan’s Naoya Inoue – a three-weight world champion – whose freakish power for a 118lbs fighter was shown last night on the Glasgow chief support card. British fans were  when he unified Emmanuel Rodriguez’s IBF title to add to his own WBA crown. The two unbeaten protagonists went at it immediately, trading from the first bell. It appeared reckless from the Puerto Rican, given Inoue’s near 90 per cent knockout ratio.

Sure to form, in the second round, the Japanese fighter’s famed counter left hook dropped Rodriguez and the man known as ‘The Monster’ felled his foe twice more with body shots to end the show. Inoue, who moved to 17 wins with fifteen stoppages, will now face former four-weight world champion Nonito Donaire in the WBSS final later this year.

Billy Joe Saunders claimed the vacant World Boxing Organisation super-middleweight title with a dominant win over Shefat Isufi in Stevenage last night. Saunders made it a one sided contest but was hurt just once by a punch from Isufi in the sixth round. Saunders then cruised to victory, showing flashes of his slick boxing again to win on the judges’ cards with scores of 120-108, 117-111 and 118-110.