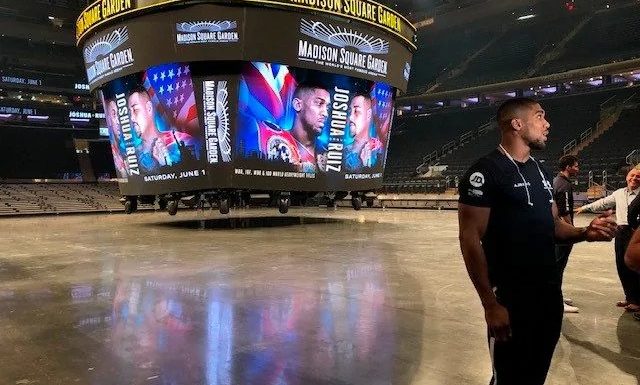 Anthony Joshua “will not underestimate” the skills or physique of Andy Ruiz Jr ahead of their heavyweight world title clash at Madison Square Garden on June 1. The Briton spoke on Monday amidst the fallout from rival Deontay Wilder banjoing fellow American Dominic Breazeale in 137 seconds to retain his World Boxing Council title.

The next three weeks will see Joshua’s defence of the IBF, WBA and WBO titles on his debut in the United States, followed two weeks later by the appearance of Tyson Fury, in Las Vegas. Both British fighters are huge favourites against, respectively, California-based Mexican Ruiz, and German Tom Schwarz.

Ruiz contests his second world title having fought New Zealander Joseph Parker over twelve rounds in that country in December 2016, outpointed by a majority decision resulting in one judge rendering a draw. Schwarz ought to be a cake-walk for the ‘Gypsy King’.

Ruiz has the opportunity to create history by becoming the first ever Mexican heavyweight world champion, and Joshua admits he is all too aware of the threats posed by his latest challenger, who he feels is deserving of a second world title shot.

“It’s not about what you look like, it’s a craft, a skill, and what’s in your heart and your head matters in the end,” said Joshua. “Andy has shown he has all that, he can fight and box, that’s what matters. I think Andy is a great challenger and will bring it on June 1. 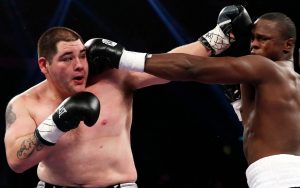 “All I’ve heard is ‘AJ will smash him in a round’. From the outside they think that anyone can box, so how is the guy that doesn’t look like a fighter able to box? I always say that if you put ten bodybuilders in the ring, not one of them could fight for a regional title in boxing.

“Take me out of my body but keep the same attributes and height, same jab, same chin, same heart and same mind, but I looked different – I’d still get to the same position I am in because it’s what is within you that makes a champion: your genetics. And his genetics are the same – and he took the fight.

“He’s keen, he’s game and you cannot knock him. He can fight and he’s got hands. He gave a world champion in Joseph Parker lots of problems, and when you look at the fight that Parker gave Whyte when people are saying Whyte can beat Wilder, Fury and me, Andy is championship level for sure, and I have not underestimated him one bit.”

While Joshua was called out (again) by Wilder on Saturday night, rival promoters Frank Warren and Eddie Hearn concurred Monday that the American could be set to re-match Cuban Luis Ortiz later this year. It would mean that either Joshua, or Fury, could meet Wilder next spring, unless, of course they fight in an all-British clash first.

The biggest issue at present is that Fury and Joshua are earning huge sums for fighting lesser opponents.