Boxing’s biggest global star, Saul ‘Canelo’ Alvarez, claimed a unanimous decision over Daniel Jacobs to unify three of the middleweight world titles at the T-Mobile Arena, Las Vegas, on Saturday night, in a rugged contest with scores of 116-112, 115-113 and 115-113 returned by the judges. Alvarez, clearly the smaller man, mixed firepower and offence in the first half of the fight, with Jacobs growing into the fight in the later rounds, clearly more successful when he switched to southpaw.

“We knew he was going to be a difficult fighter, but thank god we did things the right way” Alvarez said post-fight. “It was just what we thought because of the style of fight that he brings. But we just did our job.”

Jacobs, who missed weight by over three pounds for a contractual Saturday morning weight check, did not complain about the decision, in spite of being fined $1 million, for the extra pounds, from his $10 million purse. There had been a weight limit of 170lbs set.

The narrative of the fight was always greater with the inclusion of Jacobs, who almost lost his life from a rare form of bone cancer in 2011 and was told he would never fight again. But he has not only returned from osteosarcoma, he has become one of the world’s leading middleweights and inspirational stories.

Mexican Alvarez (52-1-2, 35 KOs), 28, making the first defence of the two belts he won from Gennady Golovkin by majority decision in September, could now unify the division, setting up an undisputed title fight with WBO champion Demetrius Andrade. 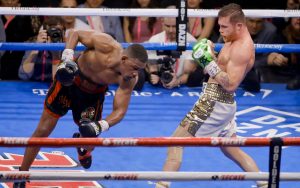 Alvarez earned $35 million for the bout – the second fight in an 11-fight contract with streaming service DAZN worth $365 million – and was by far the dominant boxer on the CompuBox punch statistics, landing 188 of 466 shots (40 percent); Jacobs landed 131 of 649 (20 percent), in his fourth career loss.

Andrade will defend his belt against contender Maciej Sulecki on June 29 in the first fight of his career in his hometown of Providence, Rhode Island, at the Dunkin’ Donuts Center.

Alvarez refused to name his next opponent, but Andrade, then a trilogy fight with Golovkin, looks the likely path.

“I’m just looking for the biggest challenge. That’s all I want.”

Regarding any unfinished business with Golovkin, Alvarez said “No, for me, it’s over. But if the people want another fight, we’ll do it again, and I’ll beat him again. That’s why I’m here. That’s what I was born for – to fight, to defend what’s mine. I’ll fight anyone.”