Amir Khan vowed that his career was far from over after a ­controversial sixth-round defeat against American welterweight World Boxing Organisation champion Terence Crawford.

Crawford walked away with his 35-fight unbeaten record intact. Khan, conversely, was subjected to boos by the 14,000 crowd at ­Madison Square Garden, and ­volleys of abuse from fans on social media, after a farcical ending ­following a low blow to the Briton’s groin.

Kell Brook, his arch rival who was ringside, insisted that Khan “had quit” and will “now come looking for a fight with me”.

Khan refused to respond to the jibes from his compatriot ­yesterday, other than to say that “the Brook fight will always be there – when I want it.” Right now, though, his state of mind in New York needs careful analysis.

However Khan perceives the fight on watching it back, Crawford was dominant before the left-handed punch to a groin left the Bolton fighter doubled over in so much pain that his trainer, Virgil Hunter, quickly pulled his charge from the fight, even though referee David Fields was allowing Khan the mandated five minutes to recover. 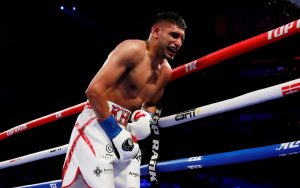 Even to that point, nonetheless, Crawford, regarded in the top three in the world pound for pound, was dominant. One judge gave Khan the second round – as I did – and one the third. But those were the ­meagre pickings. The rest was all Crawford, fluid and spiteful with his assaults, as Khan just managed to keep a foothold.

The three-weight world ­champion from Omaha felled Khan with a right hand in the opening round, and then laced his ­challenger with heavy shots and ­attacks, switching to the southpaw stance he favours in the third round. In the fifth, he punished Khan to the body over and over.

But Khan was adamant yesterday that a 14-year professional career that has brought him more than £30 million in earnings would go on. “I can’t go out like that,” said the 32-year-old, whose face was badly bruised and marked up in the ­aftermath.

“I have a lot left in me, there will always be opportunities for me out there. This will not be my last fight. Apart from the knockdown in the first round, it wasn’t a brutal fight. I am going to spend time with the family and take time off. I’ll see what comes up after this.”

Khan was contemplating his ­future with his wife and daughters as he looked out from his ­apartment overlooking the Empire State Building yesterday.

“I would never quit, I would rather get knocked out,” Khan ­explained. “I have never been hit below the belt and was in pain. I want to apologise to all of the fans. If I had known I probably would have taken the full five. It was sore. I couldn’t think straight after it.

“I could feel it getting worse and my trainer Virgil stepped up and said, ‘Let’s pull it’. I have never quit from anything. I would rather be knocked out. I will assess my future with my family. But I now know why he is considered the best fighter in the world.”

Hunter, who told officials to end the fight as Khan tried to recover but was clearly in discomfort, is adamant it was the right move. He, revealed afterwards that Khan had also had issues with his right arm during the fight.

“Khan told me he could not feel his legs so I did not want him to go on [due to the groin blow],” Hunter said, having told the radio c­ommentary team that the crowd “will always be bloodthirsty and want to see a dramatic ending, but you have to look out for the safety of the fighter”.

“He’s not the kind of fighter to make things up. I believe he was ­incapacitated. We knew we were behind, but Amir was starting to work things out and pick up his rhythm.” 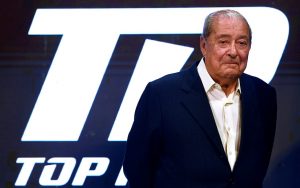 Top Rank chairman Bob Arum, the promoter, was less generous to Khan. “It was bull—-. I’ve been promoting this sport for 55 years and Khan should have ­carried on.”

In the aftermath, Crawford and promoter Arum called on boxing manager Al Haymon and the ­International Boxing Federation welterweight Errol Spence for a unification. It would represent an all-American mega-fight to ­compare with legends Thomas Hearns and Sugar Ray Leonard in the 1980s.

“We want Terence Crawford to fight Errol Spence now. Everyone wants the fight. There is one guy stopping it, and that is Al Haymon. It’s time boxing writers started ­demanding that fight,” said Arum.

For Khan, who rose to prominence aged 17 at the Athens Games with a silver medal and has gone on to fight some of the finest boxers in his weight division, it is time to carefully contemplate his future.