Amir Khan will go to hospital this week after passing blood following his sixth-round retirement because of an “illegal” blow by Terence Crawford in the world welterweight fight at Madison Square Garden on Saturday night.

The 32-year-old Briton claimed that if the roles had been reversed and he had hit champion Crawford below the belt, he would have been disqualified and would have come in for far worse treatment from fans, officials and the promoter. Nonetheless, Khan was taunted as “a quitter” by rivals and on social media after Virgil Hunter, his trainer, quickly pulled him from the fight even though the referee was prepared to give him five ­minutes to recover.

“It does hurt, physically and emotionally,” Khan said from his apartment in Manhattan yesterday. “The fight was the highest point of my career and I have to give credit to Terence Crawford because he’s a lot better than I thought he would be.

“We are all human and if you get hit it hurts you. If I was hit in the head, caught on the face or cracked in the eye socket, then that is different because it is a legal shot.

“This was different. It was an ­illegal shot. Imagine if I’d done that. I would have been disqualified and criticised. I’d have been called a cheat and accused of wanting an easy way out because the fight was hard.”

Khan admitted that he was “still peeing blood” from the body shots and low blow and that he would go for a hospital check-up this week. “There was blood after the fight, then a little bit on Sunday morning. But I’m OK now. The wife will make me go and get checked out. I said to her that I’m a fighter, I get hit and that these things happen, even in sparring. 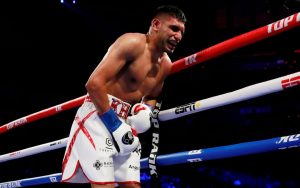 “He was throwing body shots and some of them were quite low. Look, he’s the champion and he’s going to get more favours than me. When you do get hit below the belt, it can take time for you to recover. He knew what he was doing.”

“A lot of people keep asking me the question and I honestly don’t know what happened,” Khan said. “I talked to the ref and he said I had five minutes. Then I took a walk into the middle of the ring to open up my stomach and see how I felt.

“I came back and Virgil had ­already called it. He said afterwards that it was his decision to call it ­because he said it wasn’t fair that I got hit by a low shot.”

Khan admitted that his “addiction” to the fight game would make it hard for him to walk away.

“I’m 32 now, but I feel like I’ve got a lot left in me. I have to sit down with my family, close friends and also my wife,” he said. “Retirement is not something I’m looking at and I definitely wouldn’t want to leave the sport in this way.

“I’ve still got it in me to carry on. This is just another bump on the road and it’s not one of the bumps against someone who is low calibre. This was against the best of the best, a pound-for-pound guy. 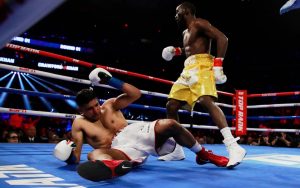 “Boxing is one of those sports where once I leave I don’t want to come back. I give my family a heart attack every time I fight and they hate me fighting. I have to be ready to finish. I don’t want to finish thinking, ‘Could I have fought again?’

“I’ve had a crazy up-and-down career and opportunities have ­always come. No matter who I have fought I have always given it my all.

“Another call will come again saying: ‘Amir, there is another big fight, do you want to top the bill again?’ Maybe they’ll offer me Errol Spence [the unbeaten International Boxing Federation champion] and I’ll think about that … maybe I need to think about what I do and don’t take from now on. My dream was to win a world title and top big bills and I have done that. Everything else is a bonus now.”

He added: “Retirement has to be a solid decision. Returning at the wrong time would haunt me. I have been 14 years a professional, 10 years fighting the top guys in the world. It’s a long time. I’ve won a world title, topped the bill at big arenas, fought the pound-for-pound guys. It’s hard to say no, it is an addiction.”