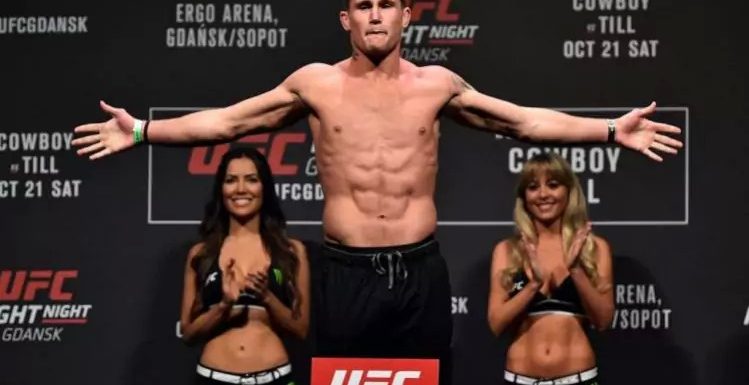 Liverpudlian Darren Till headlines tonight against what he calls “the perfect dance partner” in experienced Mexican-American Jorge Masvidal in a welterweight contest which may determine whether the Briton is elevated to another title fight in the UFC in the coming twelve months. London’s O2 Arena will reverberate to the UFC’s ninth event at the venue in the old city docks.

The 26-year-old had a nightmare night in Dallas last year when he was defeated by then UFC welterweight champion Tyron Woodley, but Till has shaken of the disappointment with a resounding clarity.

“It was horrible, I cried and cried in front of my girlfriend which she had never seen from me,” explained the skilled southpaw striker and grappler, who had been stopped in the first round without landing a blow on the American.

“It was so disappointing, I had a plan to win the fight in the third round, and when that doesn’t happen, it’s an awful feeling.” Yet just a few days later, Till was back in the public eye doing interviews.

Had he watched it back ? “Yes, many times. Watching its just strengthens me over it, hardens me and makes me remember about pulling the trigger.” A champion attitude from Till, who has become the UFC’s ‘poster fighter’ in the UK.

Masvidal, as famous for his old school Miami street fights as much as his MMA career – a long, and decorated one it is too – provides the kind of test and desire to fight that should suit Till down to the ground.

Both men have professed to stand and trade tonight, yet the local hero may be well advised to fight smart, which his coach Colin Heron, of the Kaobon Fight Gym, will no doubt have instructed his charge. Masvidal is at his most dangerous in exchanges, is heavy-handed, has a iron-clad chin (he has not been stopped by TKO or KO in over a decade) and can be at his most virile when hurt. It should be a thriller.

Till also called out the Irishman Conor McGregor this week, and re-stated the great desire he has to become the first fighter to “fill out Anfield with an MMA fight”. There is certainly the following to create it, both in the country, and for Till in and around Merseyside. ”

“Conor McGregor is the fight, it doesn’t matter about weights,” Till insisted. “I want to do it. He’s probably the more mentally stronger. It’s a perfect fight.” Given the huge draw McGregor has become, there is a long line calling his name, which includes Donald Cerrone, Nate Diaz and others. There is a large size discrepancy, but that never stopped BJ Penn fighting Lyoto Machida at heavyweight several years ago.

In the co-main event Icelander Gunnar Nelson, from the same Dublin camp as McGregor, faces talented striker Leon Edwards, also at welterweight. Edwards will want to keep the fight standing. It is perilous for any opponent to take Nelson, a savant on the ground at an elite level, to the canvas. Keep it standing, and it will be Edwards’ night. Yet that may prove difficult for fifteen minutes. Nelson needs just one opportunity.

Great chat to @jackmarshman19 today about Wales in @SixNationsRugby Grand Slam final vs Ireland on Saturday and where he will watch it before fighting fellow Welshman John Phillips #ufclondon pic.twitter.com/i9I7ds1mIi

In an all-Welsh clash Jack Marshman faces John Phillips, in a contest that Marshman told The Telegraph “was always going to happen” and could be a show stealer. Both men will watch Wales against Ireland in the Six Nations Grand Slam decider this afternoon, but “not together”, Marshman, who struggled to make the middleweight limit, had explained earlier in the week.

The fight has been made at a catchweight 188lbs, two pounds above the accepted level. Till explained on his social media channel that he had been in the sauna with Marshman as he tried to lose the final few pounds ahead of Friday’s official weigh ins, and that he had witnessed the 29-year-old “doing everything he could”. Less than perfect, but it is time to deliver tonight for the roster of fighter’s for the UFC’s annual visit to London.